“But I have been too deeply hurt, Sam. I tried to save the Shire, and it has been saved, but not for me.  It must often be so, Sam, when things are in danger: someone has to give them up, lose them, so that others may keep them.”

says Frodo at the end of J.R.R. Tolkien’s ‘The Lord of the Rings’.

“How do you pick up the pieces of an old life?”

ponders Elija Wood as Frodo as he wanders around Bag End listlessly at the end of Peter Jackson’s ‘The Lord of the Rings: The Return of the King’.

Frodo’s musings work perfectly within the context of ‘The Lord of the Rings’: forced to leave the innocence and comfort of Hobbiton to travel across a world into the scorching hell of Mordor; after having witnessed unimaginable suffering and having suffered himself; over the course of almost a 1000 pages in the book and over 10hrs of screen time in the films (the cinematic versions not the extended DVD editions), we empathise with Frodo’s struggle to fit back in when he returns to the quiet routine of his home.

But the passages have a deeper resonance for those who know because it is impossible to read/hear either of them and not think about what inspired them: Tolkien’s experiences in the First World War and the disconnect the soldiers who survived felt when they returned home.

There are many allusions to WWI in ‘The Lord of the Rings’: the rising threat of danger and destruction amassing in the East as Sauron assembles his armies mirrors the rise of Germany; the decimation of natural forests to build factories to service the war effort around Isengard was what Tolkien witnessed happen to the countryside around Birmingham; the alliance of many people from different countries speaking different languages coming together to fight a common foe in Sauron equates to the alliance of Russia, France and the UK against the alliance of Germany and Austria-Hungary ; the talk of how the War of the Rings will be the great war to end all wars echoes what most thought about WWI when 70 million troops were mobilised and 16 million people died.

“I cordially dislike allegory in all its manifestations, and always have done so since I grew old and wary enough to detect its presence. I much prefer history – true or feigned– with its varied applicability to the thought and experience of readers. I think that many confuse applicability with allegory, but the one resides in the freedom of the reader, and the other in the purposed domination of the author.”

So Tolkien never explicitly set out to write about the war in an allegorical way, as Orwell set out to write about a totalitarian state in ‘Animal Farm’, but he accepts that as readers we might look at Frodo’s journey through that lens: the truthful rendering of an experience many found indescribable: having to abandon their homes to travel to faraway places to fight a remorseless enemy and witness unimaginable scenes of horror and destruction.
​
Whereas Tolkien seems reluctant to accept his use of metaphor, others embrace it: Paul Verhoeven has described how his 1987 film ‘Robocop’ is a retelling of Christ’s story, Steven Spielberg has talked about how E.T in his 1982 film is really a father figure who steps in when Elliot’s real father has left (in one scene E.T. even dresses up in a man’s clothes and gets drunk whilst watching TV) and Neill Blomkamp accepts that it was apartheid blighted Johannesburg that inspired ‘District 9’.  One of my favourite uses of metaphor is in James Cameron’s ‘Aliens’. 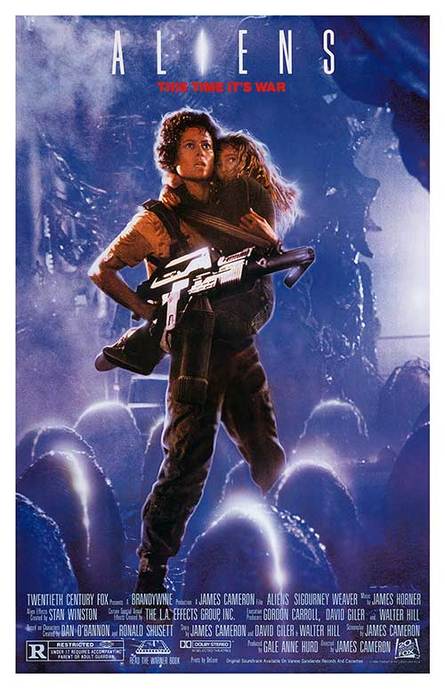 “The national psyche was still full of Vietnam so I think that, because Jim was going to do it all with colonial police kind of thing, there should be a subliminal Vietnam look.”

says the inspirational Ron Cobb who worked as the conceptual artist on the film.  Once you know that ‘Aliens’ is a metaphor for the Vietnam War you see the similarities everywhere: the insidious corporation that sends a group of highly trained, gung-ho marines into battle against a less equipped but determined enemy.  How the marines’ initial optimism quickly turns to despair as their numbers are decimated.  How they become resentful and disillusioned when they realise they were sent to war not for a noble purpose but to service the corporation.  And how, in the end, the only survivors are the ones that knew the war was wrong and unwinnable from the beginning: Hicks, the cynic, Newt, the innocent victim, and Ripley, who tried to warn everyone from the start.

Once you start looking for it you can find metaphors, intentional or unintentional, everywhere: in the adventures of Harry Potter; in the dark corners of any good horror story; in the battles between superheroes and super-villains.

“The function of allegory is not to hide but to reveal, and it is properly used only for that which cannot be said, or so well said, in literal speech. The inner life, and specially the life of love, religion, and spiritual adventure, has therefore always been the field of true allegory; for here there are intangibles which only allegory can fix and reticences which only allegory can overcome” (Lewis, Love 166).

Maybe that is why sci-fi and fantasy tackle the big issues of war, despair and political intrigue.  Lewis’ Chronicles of Narnia are seen as a reimaging of the Christian myth – which is, as Joseph Campbell revealed, just a reimagining of an ancient universal myth.  Which brings us back to ‘The Lord of the Rings’ because it is also a retelling of the mono-myth.

So even though he was set against it, Tolkien layered metaphor upon metaphor as he expressed his pain and the pain of many thousands of others in one of the greatest feats of imaginative storytelling.

He wrote about what he knew but didn’t constrain his imagination to what he’d seen.
​
And a good metaphor, used intelligently, is what great storytellers always use to allow their imaginations to soar.