What I Learned in Film School Part 1 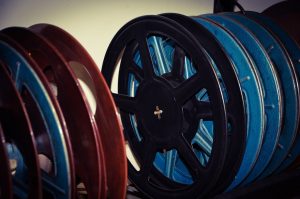 I spent an excessive amount of time in film school—six years to be exact. I can tell you what I think are the two most important things that I learned after all that time:

1. Writing groups are an incredible asset for your work
2. You need to understand how to take notes

So, let’s talk about writing groups.

You need at least one. There are so many positives to having a dedicated group that meets weekly, bi-weekly, or even monthly.

Take my group for instance. We all met in film school two years ago, and after graduating, we kept the group going. It’s not all-business either. We’ll hang out, watch movies, play board games, or go to bars. They’re my friends and creative partners.

It’s important to build your support system now. Writers need each other to motivate, inspire, and keep each other consistent in their work. Don’t make the mistake of thinking that they are your competition. There is nothing to be gained in treating your group or other writers as enemies or rivals. Writing is difficult enough as is.

So what tangible benefits would a group give you?

It’s going to be hard to write sometimes. Maybe you’ve had a long day or week.

Pretend for a moment that members of your writer group are producers that want to see your material. Do you go into that room with no pages? The answer is no. Treat the group as if they’re all industry professionals taking time out of their day to see your work. Hold each other to that standard too, and you’ll find motivation.

Sometimes that still isn’t enough. A lot of us hold full-time jobs. That’s okay. Go to your group anyway. You might not have any new material, but you’re helping others with theirs. Maybe that’ll give you a spark of inspiration. Speaking of which…

You should read each other’s work out loud. You may have heard this before, but it bears repeating:

You will never find problems in your dialogue faster than when it’s spoken.

Have fun with the table read. Get into it. Let your readers bring the characters to life. Giving your writing group that freedom could help you. By all means, let them know what you have in mind for the characters, but then let them run with it. They could give you a quirk or tone that inspires you to take the characters in new directions.

You’ll also find out if your action is clunky or unclear. This is especially helpful in complex scenes or sequences. Additionally, it’s often likely that a few typos slipped past you when you read a scene to yourself, but they won’t slip by when you speak it. It’s all about keeping…

Beyond what’s immediately on the page, your group is looking for the consistency in your script. Let me give you an example of what I mean:

In 2017, I decided to rewrite a sci-fi script that I “finished” in 2010. When I read the story again, I saw the problems. Characters that I was proud of seven years ago felt like they weren’t all the way there. Story elements weren’t coming through or conflicting with each other. Time away from my script gave me fresh eyes.

Seven years is a mighty long time though, and you can get the same effect in a fraction of the time with a writing group. The first time you bring material to the group, don’t over-explain it. Give everyone just enough information to create initial expectations.

“It’s about a guy who’s literally turning into a monster.”

“It’s about a family that moves into a haunted house.”

“It’s about a young woman’s first year at university.”

That’s all your group needs to know. They’re listening, so let your script speak for itself during that initial read. They’ll start creating their own ideas and opinions on every element. Characters, arcs, structure, dialog, and story are all on the table.

Let me make one thing clear: you are not writing by committee. You have an overall vision of what your script should be. No one knows it better than you. You can have your vision and explain your creative choices. That’s expected.

However, sometimes you can’t see the woods for the trees, and that brings me to what I think is the second most important thing that I learned in film school.

How to take notes.

To continue reading Sean’s article go to Part 2 on the InkTip website.

Originally from St. Louis, Sean Thompson studied screenwriting for six years, earning a BA and MFA from Webster University and Chapman University. He currently oversees the Marketing Department at InkTip in Los Angeles. When he’s not writing, he’s keeping his cats, Simba and Scar, out of trouble.