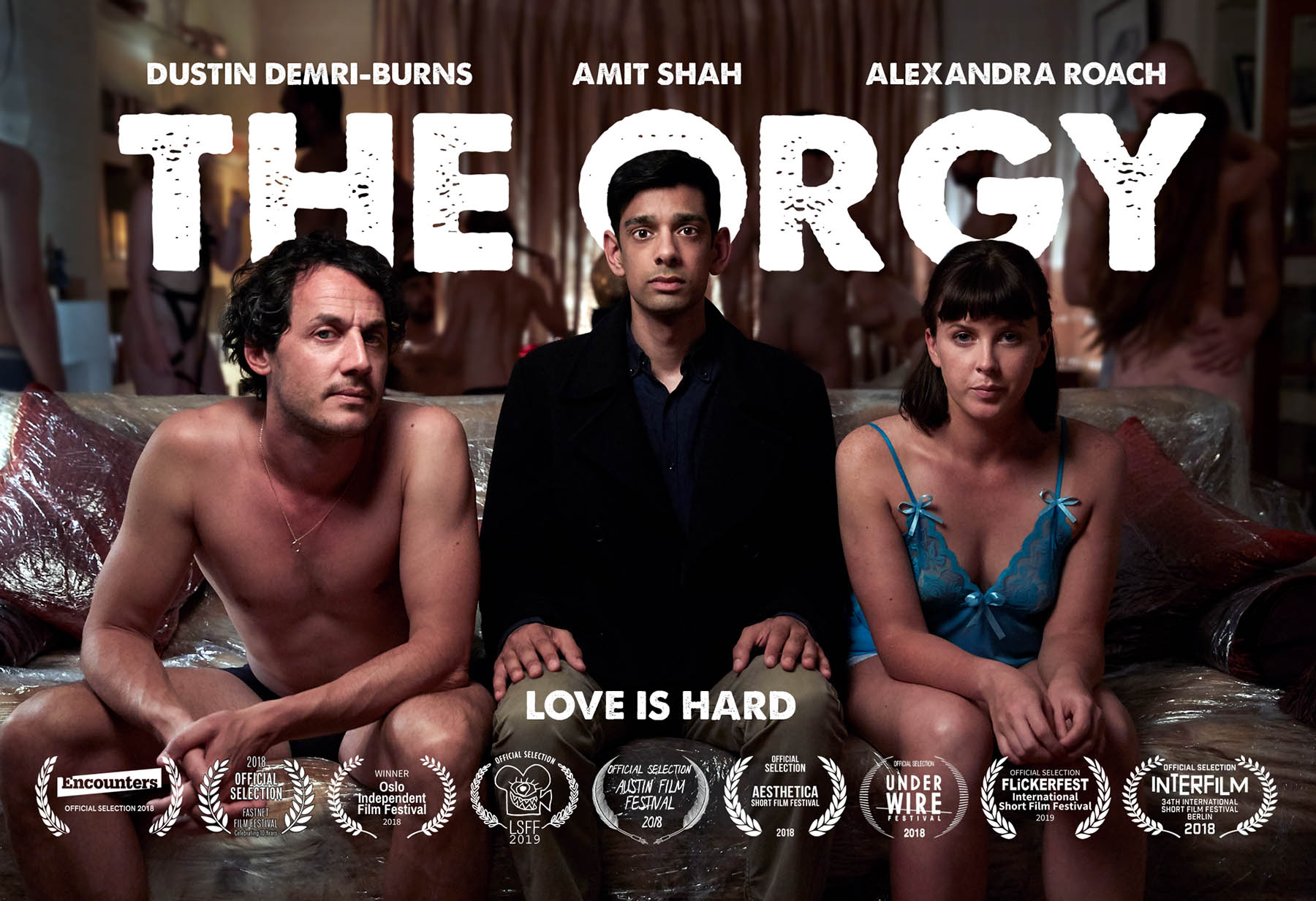 The project is produced by Tilly Coulson through her new banner Allgood Films, and is a co-production with Daniel-Konrad Cooper’s Rather Good Films (Burn Burn Burn). Shore Scripts and Dave Beazley are Executive Producers. Coulson works as Creative Executive at Working Title Films in London.

Baron is going on to direct his feature debut The Science of Love and Laughter from his Nicholl-winning script which also featured on The Brit List. Producer Gary Foster (Denial) and Rather Good Films are now packaging. Baron’s previous shorts have netted 6 million hits online.

Alexandra Roach’s TV hit No Offence has recently been renewed for a third series, while Amit Shah will next appear in Breathe alongside Andrew Garfield and Claire Foy, directed by Andy Serkis. Read Sam’s article on Making It As A Screenwriter 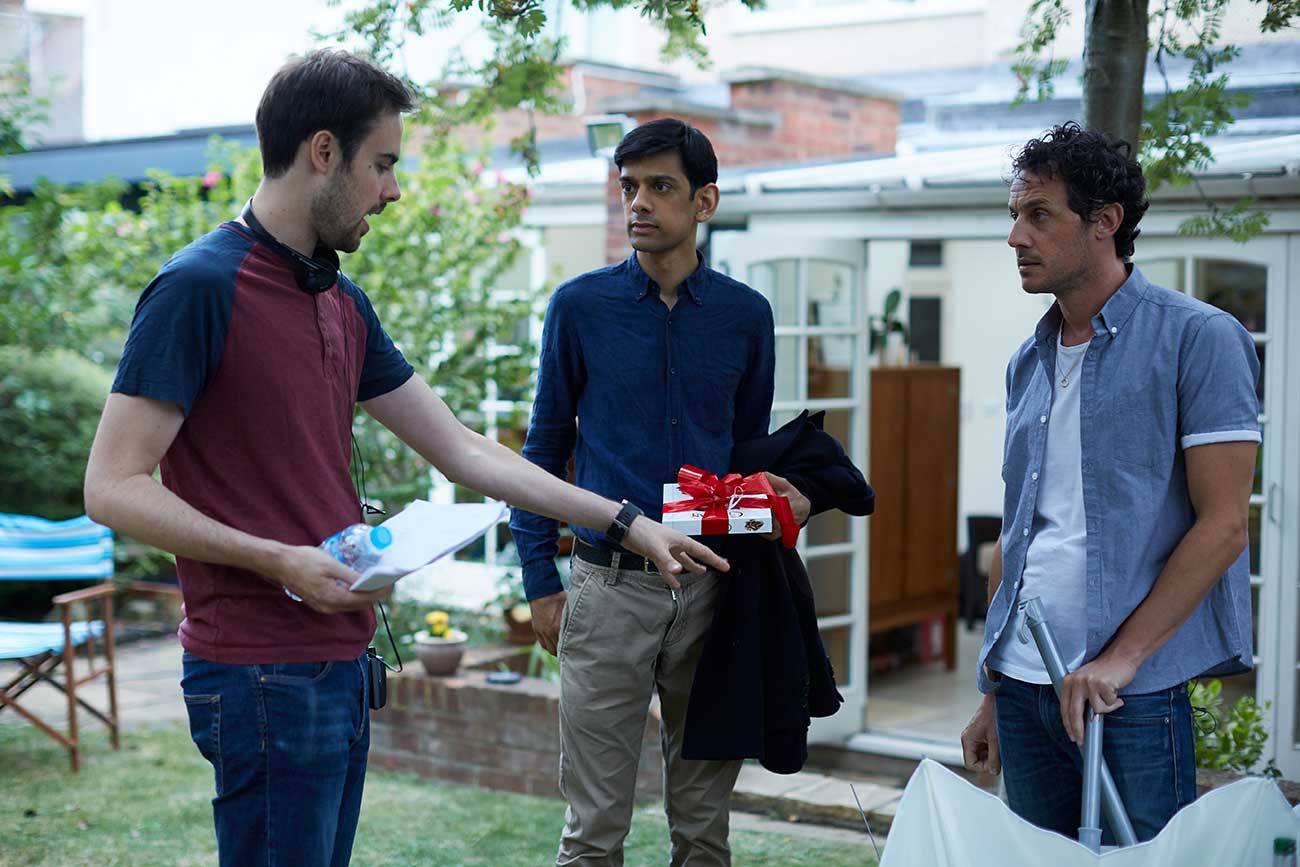 We wanted to make a film about feeling like you don’t belong – the feeling you get when you start a new job or a new school or walk into a party where you don’t know anyone. We figured an orgy would be the ultimate version of that. The expectations are so high, and the potential for embarrassment is so huge – the tension would be unbearable, and that vulnerable agony is what we hoped to capture, in all its comic glory. Sam wrote the first draft in one day, but we continued refining it over several months to make sure it was as funny and as strong as it could be by the time we started shooting.

We looked at the limited options for getting a short film financed and so many of them are tied to schedules which delay your ability to go into production for up to a year. We wanted a strategy which could allow us to keep up our momentum and move quickly from writing to casting to shooting the film, so the Short Film Fund’s fast turnaround from deadline to announcement lined up perfectly with our plan. 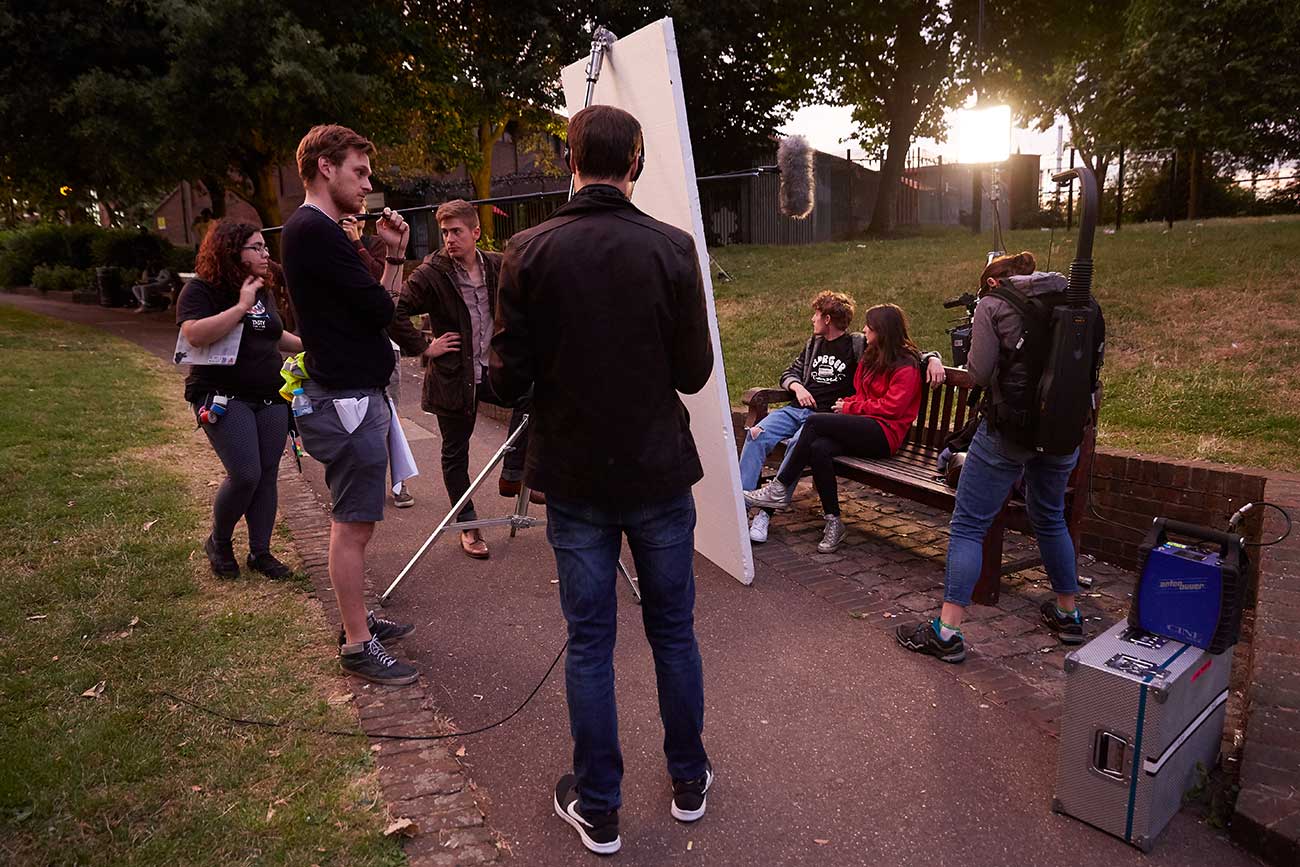 I’ve been making low-budget films and videos since I was a teenager, and have always wanted to write and direct, but after I finished university I realised I should probably focus on one aspect first of all. I chose writing because I could do it for free, so I spent a few years developing my first feature screenplay whilst working as a script reader for a production company. Now that script is ready to be made, so I wanted to make The Orgy as a calling-card short film to prove myself as a director and help raise financing for my feature.

Absolutely. I think the most important thing is understanding just how much great actors can convey with a look. There’s a huge temptation when you’re writing to make everything clear in the dialogue, but the best scenes are often about what’s not being said, so you have to give the actors space to play the underlying emotion or the tension without acknowledging it verbally. Also, you have to trust your actors’ instincts when it comes to their characters – if they’re stumbling over a line, it’s probably because it doesn’t feel right to them, so you need to be ready to figure out why and either give them a note which will unlock it for them, or rewrite the moment so it does feel natural. Finally, the process of turning a script into a shot-list is a brilliant exercise in streamlining your story – boiling it down to its simplest form – and the more you can do this when writing, the better.

Never in the first draft, but the closer you get to the shoot, the more this becomes important. For example, once we had our location, we changed the setting of one scene to embrace an unusual and visually-striking room in the house. We were lucky to have an incredible crew who made miracles happen when the practicalities were against us, so the changes we made were almost all positive rather than sacrifices.

Endless conversations between heads of departments, contingency planning, scheduling, forecasting potential disasters and trying to get ahead of them, and the same on the creative side – detailed conversations with the actors and core creative team in the weeks leading up to the shoot, so everyone was on the same wavelength and had a shorthand going into production that meant we could work quickly and effectively despite our limited budget and schedule.

Each actor was different – some wanted to go through specific lines and scenes, some wanted to talk about their character more broadly, and some just wanted to understand the tone of the film, as a guide for how to balance the comedy and the drama. It was fascinating to see how each of them took these different starting points and built their performance from there. We were blown away to see such a talented group of actors bring our story to life in front of us. 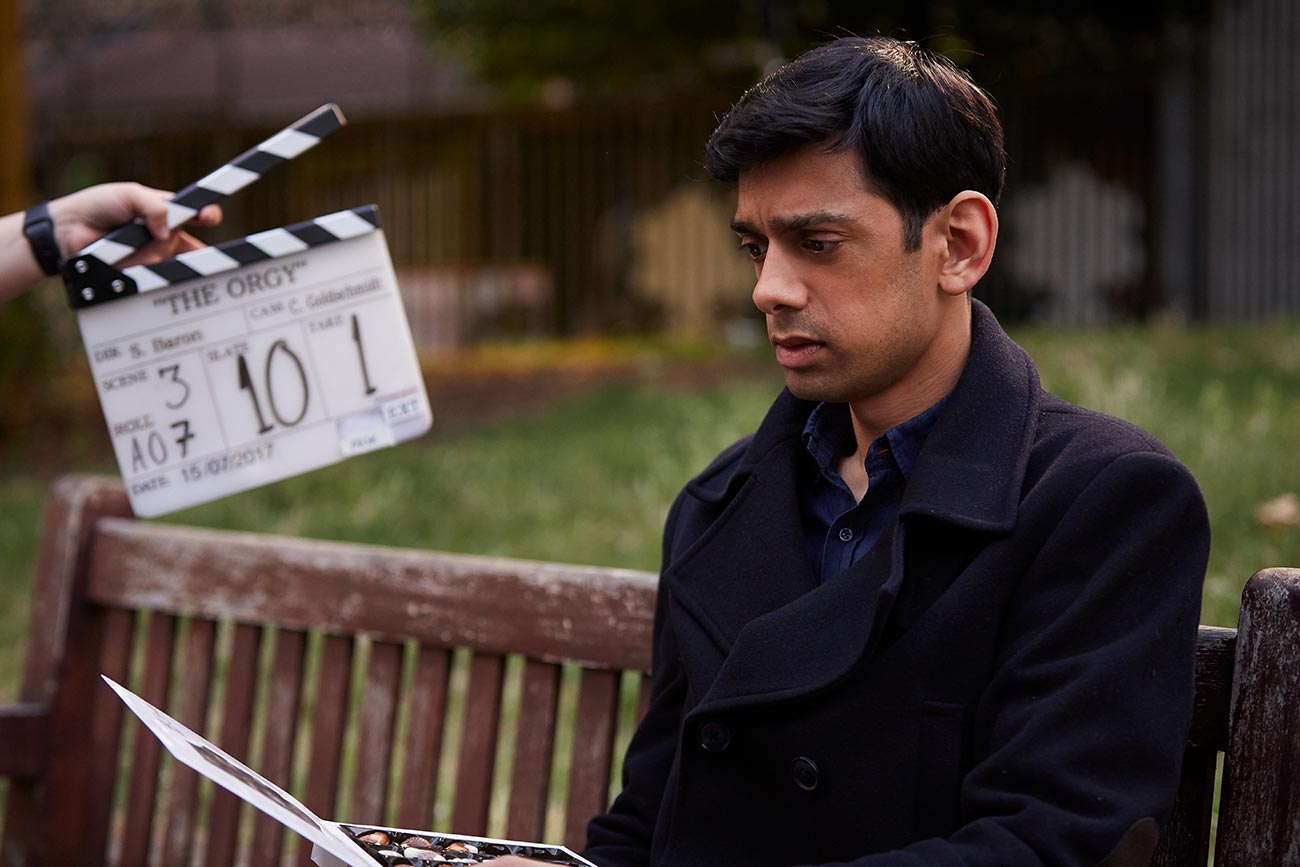 We’re excited to take the film to festivals, and can’t wait to watch some of our big comedy moments with a crowd. After that, we’re planning to launch the film online for free, so it can be seen by as many people as possible.

Choose a story that excites you and find a collaborator who shares your vision for the film, then ignore everyone who tells you it’s too ambitious or can’t be done and don’t stop until you’ve made it.

We spoke, emailed, texted and WhatsApp’d each other dozens of times a day, for several months, at all hours of the day and night, going over every possible aspect of the film from a creative and logistical standpoint, until somehow everything was in place and it was time to shoot the film. Luckily we’re good friends and we have huge respect for each other creatively – if not, we might have driven each other crazy.

One of the biggest challenges is locking a schedule, as there are inevitably numerous reasons why things might need to shift, from cast availabilities to location constraints, and juggling these can be tricky. Luckily our wonderful cast were really flexible, which helped enormously with our timings. Once we had our dates locked, around 6 weeks out, we were able to launch into prep with a vengeance, rally our fantastic crew and get cracking.

As every project is so different and requires a unique approach it’s tough to give broader advice, but for me the process was so enjoyable thanks to how brilliant every single member of our crew was, which made for a really constructive and enthusiastic vibe on set. So my advice would be to find like-minded people who will be up for putting as much heart and soul into the process as you – then hold on to them, as they’re gold dust. It also doesn’t hurt to make a film with an eyebrow-raising title – you get some pretty quick reads!

We must mention our incredible casting director Lauren Evans, who was the third person to join this project and who did a phenomenal job finding us our dream actors. This could very easily have stayed as a script in a drawer, but with her help it became a real project starring some of the U.K.’s best performers, and this helped us attract an equally talented crew and raise the money we needed to make it. We also want to thank our cast and crew, who worked with such dedication and passion to bring this ambitious project to life. 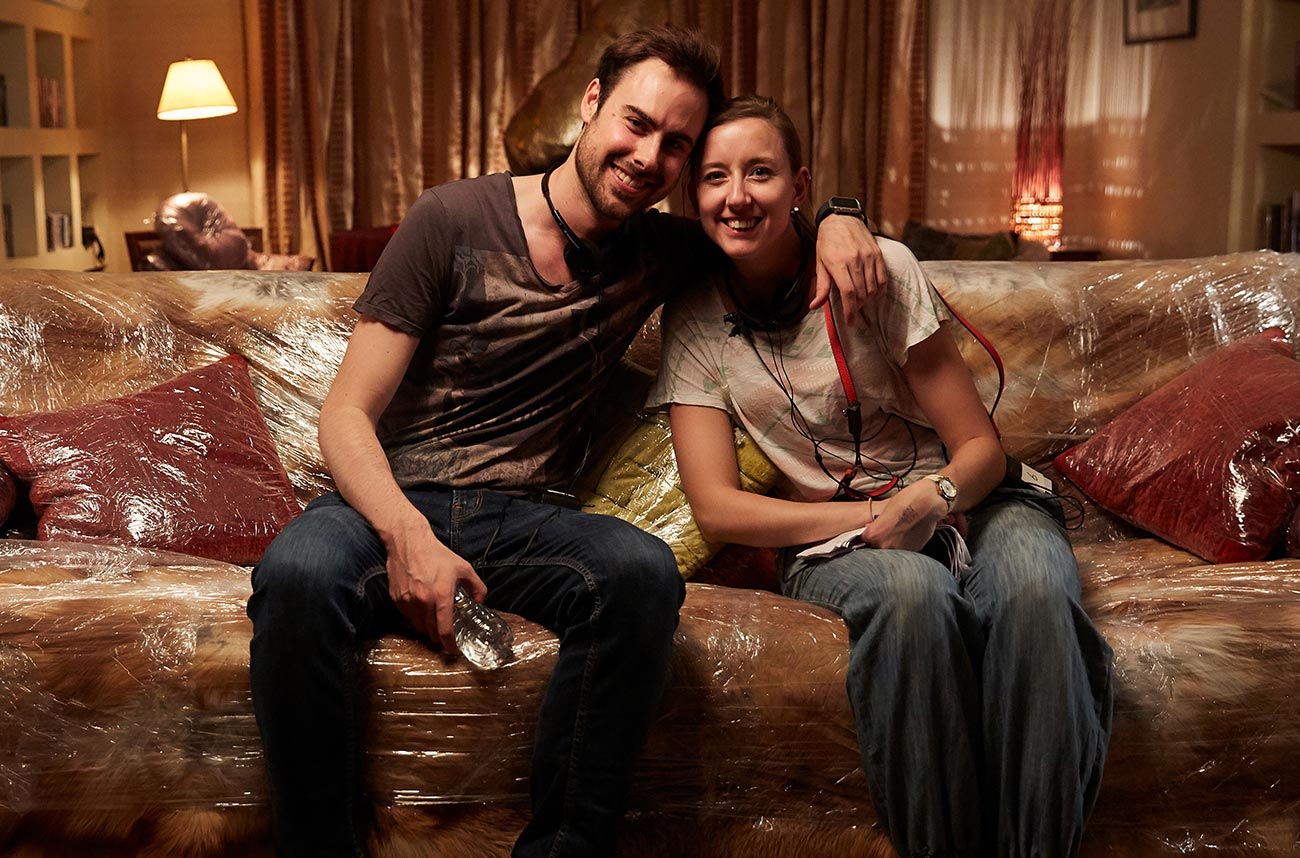 All set photographs by Laura Radford