The Role of the Protagonist in “Raiders of the Lost Ark.”

He said, “Here’s my jaw, drop it.” So, she said, “All right: Indiana Jones plays no role in the outcome of the story.  If he weren’t in the film, it would turn out exactly the same…the Nazis would have still found the ark, taken it to the island, opened it up and all died.  Just like they did.”

Fans of The Big Bang Theory amongst you will remember this exchange between Sheldon Cooper and his long-suffering girlfriend Amy Farrah-Fowler, and how, in a matter of seconds, she unpicks one of his favorite films and destroys it for both him and the show’s other regulars.

There have been many impassioned rebuttals of Amy’s critique of Raiders of the Lost Ark: people point out that if it wasn’t for Indy the Nazis would never have found Marion; if it wasn’t for Indy the ark would have been loaded onto a plane and flown straight to Berlin; if it wasn’t for Indy telling Marion to close her eyes they would both have been killed at the end.  But as Sheldon, Leonard, Rajesh, and Wolowitz discover as they try to find holes in Amy’s logic, she is, in fact, right: when Indian Jones enters the story, the Nazis have already found Tanis, the lost city where the ark is hidden, and they are already in search of Abner Ravenwood who possesses the head-piece to the staff of Ra.

Perhaps the best we can say of Indiana Jones’ role in the plot of Raiders of the Lost Ark is that he delays the inevitable.  Not a ringing endorsement for the main character of a plot-driven action film – the same cannot be said of other 80s action heroes: John McClane in Die Hard, Schwarzenegger’s Dutch in Predator, or Ripley in Aliens. 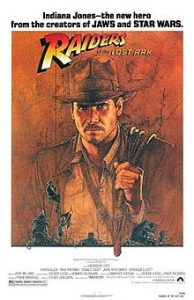 What, then, of Indy’s nemesis René Belloq?   Is he more integral to the plot?  The answer would seem to be no, he isn’t.  In the entire film, Belloq performs two actions: he takes the fertility idol off Indy at the beginning and he opens the ark at the end.  Even Steven Spielberg, in a recorded discussion with George Lucas and Lawrence Kasdan, in which Lucas outlines the story of Raiders of the Lost Ark that he had been working on with Philip Kaufman some years before, points out: ‘There’s no confrontation now with the arch-rival.’  And there isn’t – the closest we get is Belloq convincing Indy not to blow up the ark.  In Kasdan’s early scripts Indy and Marion salvage the ark and then escape from the Nazis in a mining cart through an elaborate series of tunnels (a sequence that was resurrected for Temple of Doom.  But none of that is in Raiders of the Lost Ark and Belloq had already opened the ark and been killed by the time they salvage it.  Hard to imagine that Die Hard would not end with a final confrontation between John McClane and Hans Grubber or that the climax of Predator was not Schwarzenegger going toe-to-toe with the Predator, or that Ripley would not confront the alien queen with the immortal line: ‘Get away from her, you bitch.’  It is one of the most fundamental laws of storytelling that if there is a clearly defined hero and an equally clearly defined villain they will meet at the end and, nine times out of ten, the hero will emerge victoriously.  Yet, this isn’t how Raiders of the Lost Ark ends.

Another debate that has raged, and one that is closely linked to Indy’s role in the plot, is whether god arriving at the end of the film and killing everyone whilst Indy is tied to a pole, constitutes a deus ex machina.  The deus ex machina is considered the bane of any good storyteller and story: it implies an ill-thought-out plot that can only be resolved by the sudden introduction of an inexplicable contrivance.  What sets Raiders of the Lost Ark’s potential deus ex machina apart from all other examples since the ancient Greeks is that it is literally the sudden arrival of god – who metes out vengeance and then leaves.  Some argue that god’s cameo is not a deus ex machina because it is appropriately foreshadowed: both Marcus Brody and Sallah warn Indy the ark isn’t something to be meddled with and that it contains ancient, mysterious powers.  Indy goes from being someone who doesn’t believe in the bogyman to someone who accepts there are powers he cannot understand which is why he tells Marion to close her eyes: he has grown as a character.  The problem with this argument is that Indiana Jones is going in search of the lost ark of the covenant, the adorned box containing the stone tablets upon which the 10 commandments were written that Moses brought down from Mount Sinai after speaking to God.  For Indiana to go on such a quest he must believe, at the very start of the story, that everything that happened in the Old Testament of the Bible is the literal truth – which means he could equally have gone on a quest to find Noah’s Ark or the burning bush or the pillar of salt which was all that remained of Lot’s wife after she did look.  Not a man, then, who is completely immune to the fantastical.
​
A more accurate reason why god’s sudden arrival at the end of Raiders of the Lost Ark isn’t a deus ex machina is that god is the antagonist of the story.  God hid the ark by causing a sandstorm that lasted for a whole year and clearly wants to keep it hidden.  The Nazis are the protagonists of the story: they are the ones who are driving the action in their quest to find religious artifacts.  The story ends, as all such stories do, with a confrontation between the antagonist and the protagonist, in this case between good and evil.  And good wins.