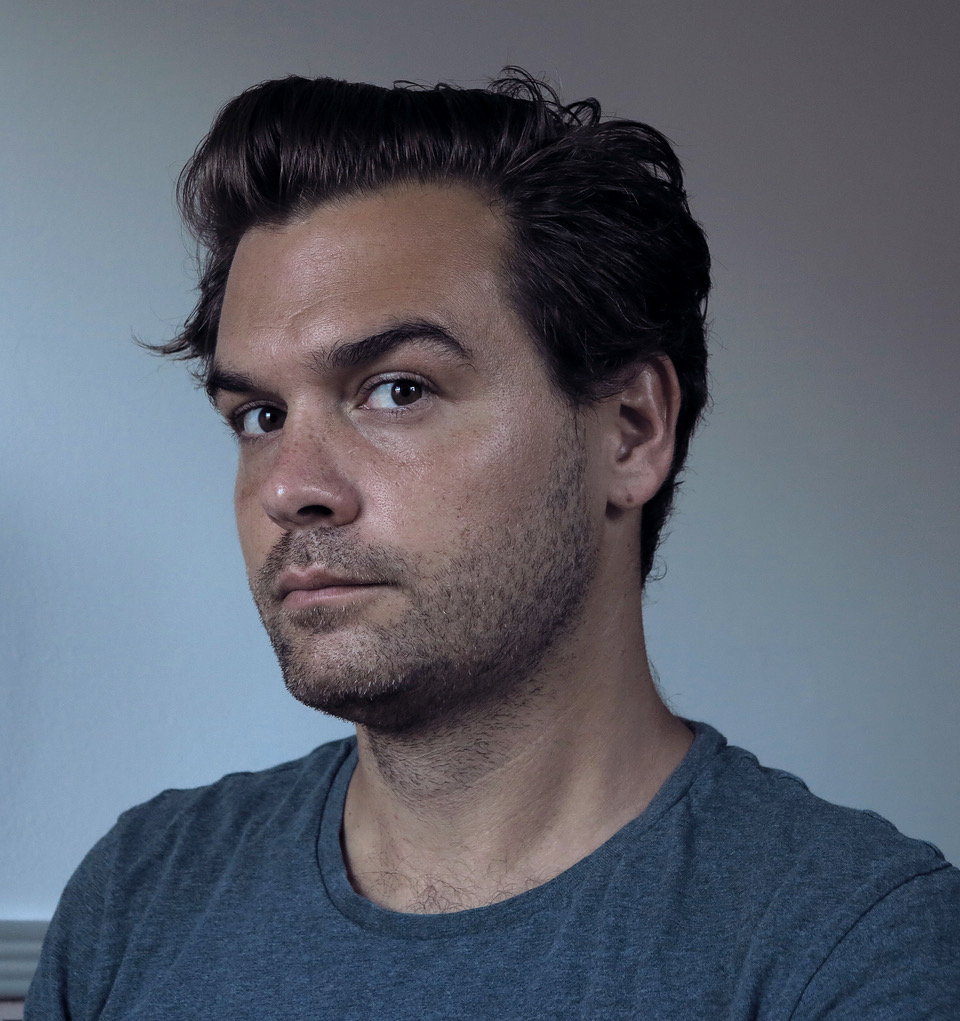 Huge congratulations to Ben Gutteridge who won 2017’s Short Film Fund. Ben was awarded $9000 to make his winning short screenplay, The Naked Man. The film was shot in Downtown Los Angeles in April 2018.

“It means a lot to have a competition like Shore Scripts recognise my writing and of course to get the chance to make my film. THANK YOU!” Ben’s website

An Invisible Man’s hopes of being seen again are unleashed by a fascinating blind girl – Without love, are we invisible?

Harry is invisible. Apart from us watching, nobody can see him. He’s invisible and he’s lonely. He can’t wear clothes because he’d look like a terrifying, floating, headless body, so instead, he follows other people’s lives, silently watching them unfold without him.

One of these people is the fascinating Molly, with her no bullshit attitude, despite her blindness. There is something oddly unnerving about his growing obsession. After she bumps into him and treats him like anyone else (unlike anyone else would), Harry resolves to win her affections. He tries orchestrating a date that goes tragically wrong, before things take an unexpected twist.

This is a tragic-comic love story between an invisible man and a blind girl, with a twist of darkness. Dealing with themes of obsession, loneliness and love, this film explores the magical, with it’s heart in reality.

STILLS FROM THE SHOOT 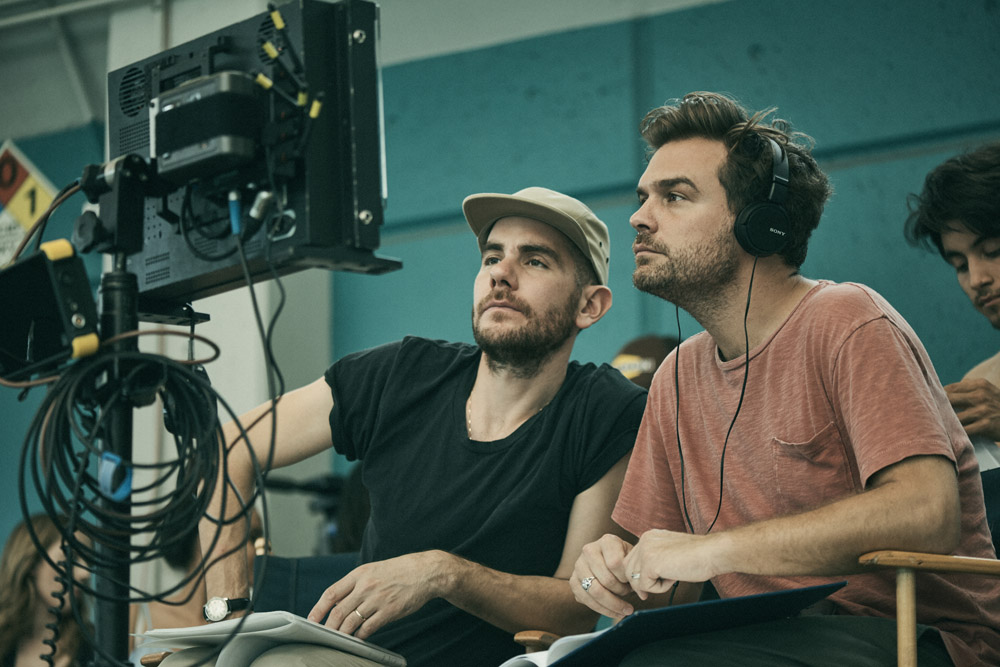 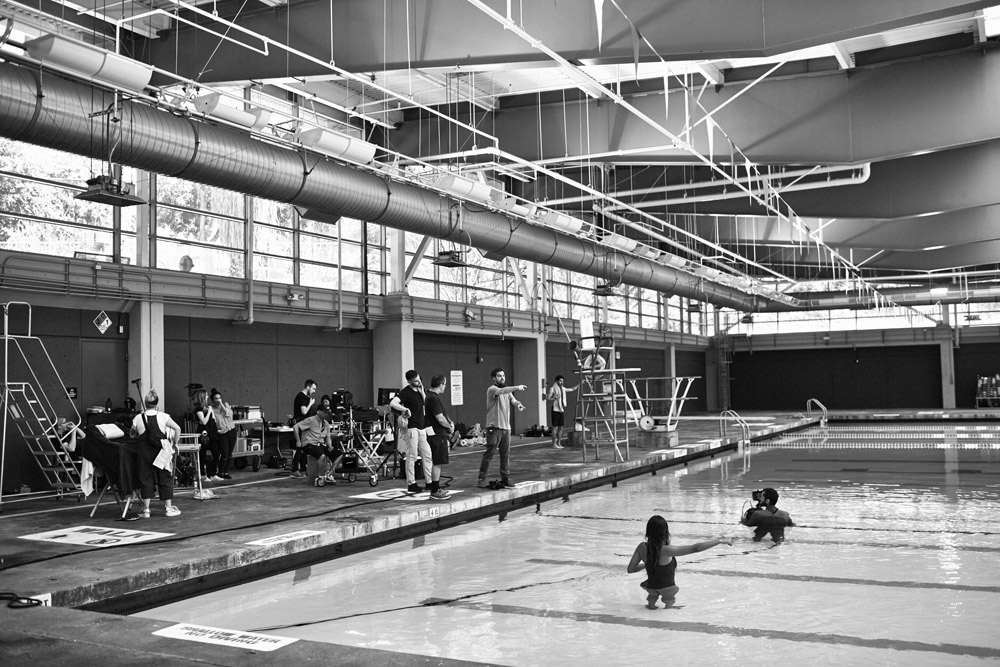 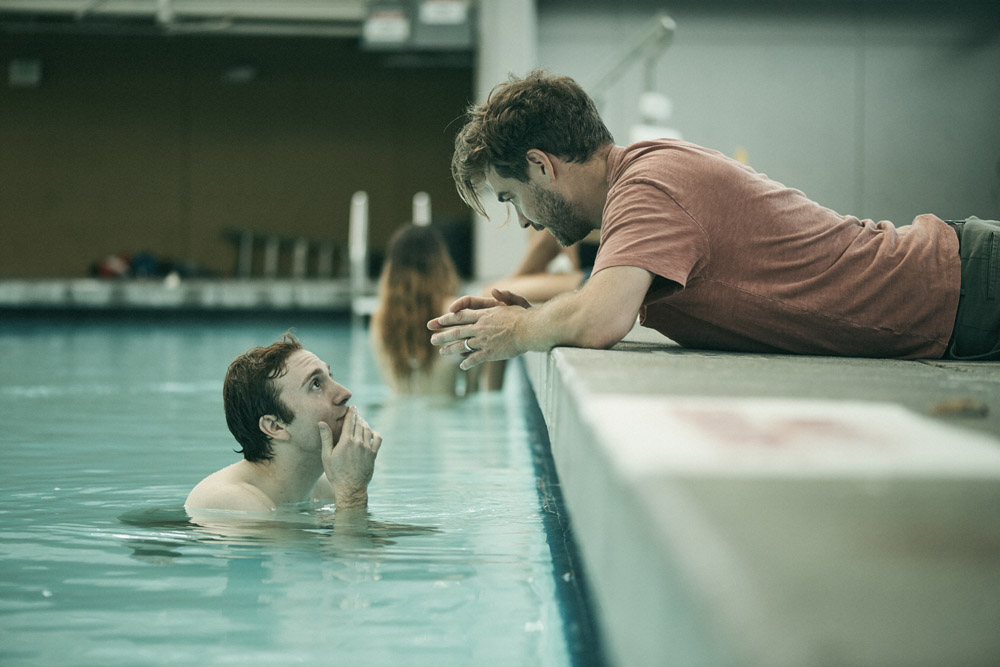 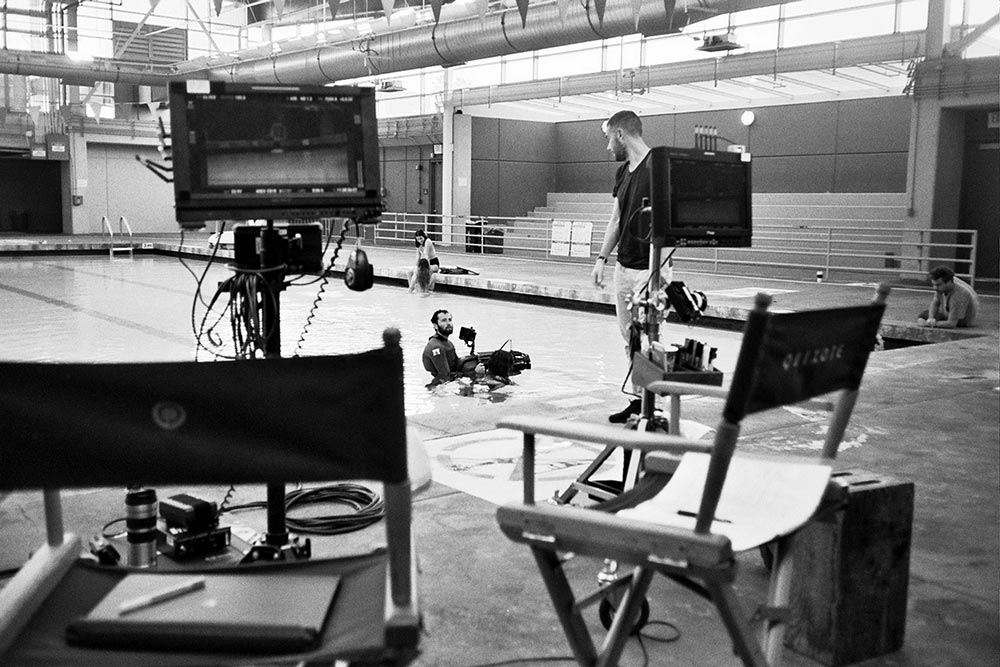 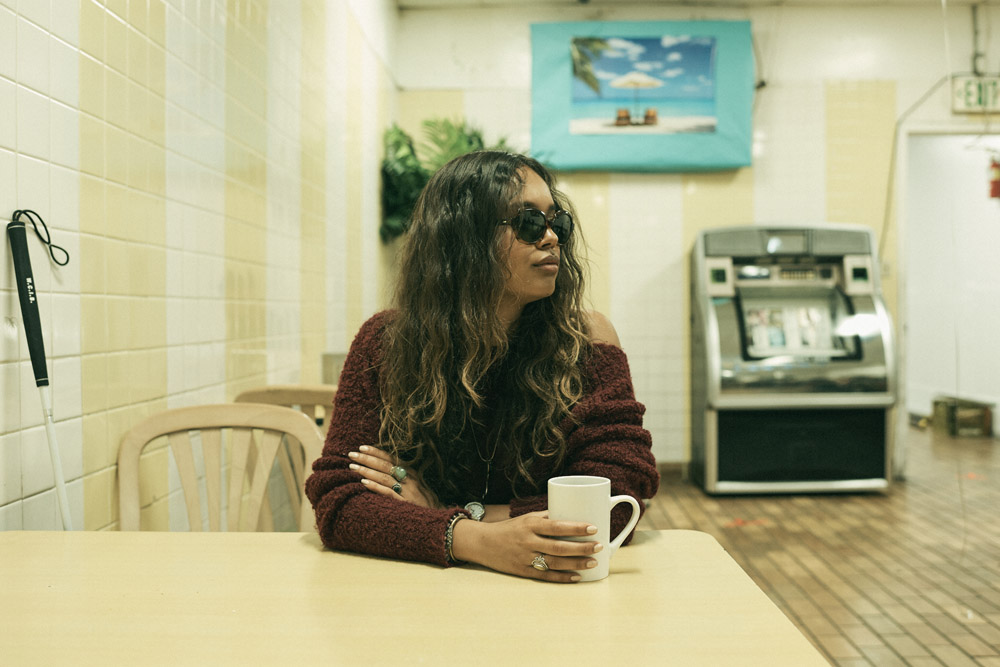 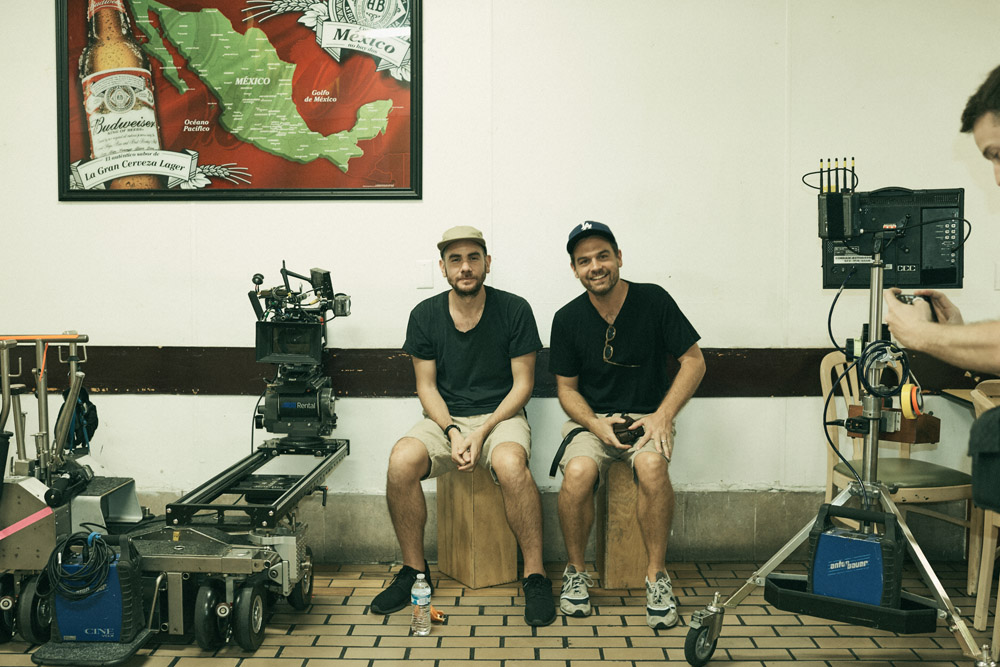 The Naked Man is a film about an Invisible Man and a Blind Girl. I started to think about what the reality of being invisible would actually be – and I realised that after the fun of being able to slip into the girls’ locker room etc had gone, being invisible could be decidedly lonely, as you would not have any human interaction. So, that is how we meet Harry, a lonely, invisible man, drifting around, following other people’s lives because he can’t live his own. Until he meets Molly, the no bullshit, fascinating, blind girl. Harry resolves to win her affections and tries to set up a date that goes tragically wrong, until things take an unexpected twist.

I want to make a feature film of this idea (which I have written) and while this short is meant to stand alone and work in its own right, it is strongly related to my feature script. While the feature involves other characters and takes a darker turn, the essence of it is there inside this melancholic but humorous short, with its suspenseful soul and throbbing heart.

I’ve wanted to make this unusual little film for a while. Shore Scripts is one of the great competitions and you guys have had some fantastic successes. It took a leap of faith on their/your part to understand and believe in what I am trying to do – and that is really heartening. Thank you.

Elated! It means a lot to have a competition like Shore Scripts recognise my writing and of course to get the chance to make my film. THANK YOU!

I started as a commercials director (after working as most jobs from runner to editor and going to film school etc at the beginning). I have also directed TV Drama and Shorts. I have always written (which began way before I started wanting to direct) but it wasn’t until a few years ago that I started believing in myself as a writer too. I adapted one of my favourite writers’ stories, Hanif Kureishi, and he liked it enough (and consequently Working Title Films did too) for me to tell myself “OK maybe you’re not shit and should start taking this writing lark more seriously”. So then, I sat down and wrote a list of my favourite films/books/plays and I realised they mostly had common traits, namely Obsession, Secrets, Power, Sex and Love. Also, that they were almost all thrillers on some level with an edge of humour: i.e. suspenseful, but always with heart and a twisted smile. So then, I decided to focus on my own stories and really getting under the hood of learning how to write properly (which of course never ends) but I feel I know enough now to start doing things properly. My Agent and Manager have also been very supportive.

Simply put, I have made other people’s ideas for work many times and consequently learned my craft to an extent, both as a Director and a Writer. So now, I want to tell my own stories, in my own way – that’s why it’s so exciting to make The Naked Man.

Like all scripts I’m sure it will evolve as we near production. Since submitting the short, I have been working further on the feature script and I have found some really interesting takes on things that will influence the short, I’m sure. I’m very much looking forward to having Shore Script’s input too.

I’m not worried about the process of getting something from the page to the screen, after all I have done that several times, but I think the biggest challenge will be casting right and making sure everything is perfect and of course making sure the script is the very best it can be. I don’t want to just make a short film, I want to make a GREAT short film. – On second thoughts: I guess shooting with a naked guy in downtown LA might be a bit bonkers production wise, but hey, he who dares, wins, right?

Great question. I think there is always a part of my brain that is thinking about the logistics of how to film while I am writing but I have to put a stop to that at the beginning and just trust my gut, to follow my impulses. My brain tends to work on overdrive in real life (which can be difficult and probably annoying for my wife) but with writing/filming it’s useful, as I can think about more than one thing at once (like structure while emotionally following instinct, or juggling things on set).

I think some writers think of characters first and build the story around that – I tend to see the film fully formed in my head (almost like a sequence of visual emotions) and then find the characters and details within that – what that means from a practical perspective, is that I’m able to shift things for production. For me, every practical decision comes from story and the pressure of each moment.

Also, nowadays, most things are possible anyway and ideas are always adaptable once they’re written.

Definitely the ARRI Alexa – Ideally anamorphic lenses. Shooting in Downtown LA. Crew etc is too early but I do have regular collaborators who I would like to work with, as well as various new people who I am keen to start professional relationships with.

I guess August/September this year would be good as that would give enough time to prep things properly. Post is usually pretty quick for me, due to my editing background.

I do, particularly for commercials (I draw like a 2 year old so always use an artist), but I also sometimes just do a shot list or a floor plan, especially in TV.

When I first started, I used to stick to the storyboard to the nth degree, even to the point of taking photos of the setups in the locations before and writing lens focal lengths onto them for the DoP but now I have learned that it’s mostly better to be looser with things on set, always having the intention/pressure of the scene/shot in your mind and also to trust your crew, as they know far more about their jobs than you do.

Now, I still go in super prepared but then I am always willing to drop everything at the spare of the moment and follow impulses, which can be terrifying but a lot of fun. It’s a question of knowing what the pressure/beats are that you trying to hit in each scene and then using everything to support that, from the choice of lens or camera movement to the colour of the protagonist’s underpants.

I would love to have time to rehearse but I guess that will come down to artist availability. For me it’s mostly about casting. If we end up auditioning people rather than offering it out, that can be a great way of trying out if the material is working and also to experiment with different ideas – but to answer the question re rehearsal, ideally as much as possible but as with everything it will come down to time and money.

Aha! well – I would love to get in all the good festivals of course, and particularly Sundance, as I went for the first time this year and it had a profound effect on me, both emotionally and intellectually in terms of my aspirations and outlook on cinema. It truly is life changing going to that festival, but of course there are loads of other great ones that would be right for this too.

I have a feature script of the Naked Man and I really want to use this short to get that made. I also have several other projects that I want to make too, both in Film and TV.

Well I think it depends on what stage they are at. If it is one of the first things they’re shooting, then I’d say keep it simple. One of the hardest things to do is to shoot two people talking in a room and make it interesting, but also a great first film as a way to stretch your legs without worrying too much about production, that way you can focus on making it perfectly (PT Anderson’s short, Cigarettes and Coffee is a good example).

Related to that, I’d say make things that fit your budget/resources. There’s no point writing a short film that needs loads of effects and huge cinematic crane shots etc if all you have is an iPhone for a camera and your dog for crew. If that is the case, write a story that fits the iPhone (like the brilliant Tangerine). Imagine Apocalypse Now shot on an iPhone in someone’s back garden for $100 – probably not great, no matter how good the script.

The other thing I’d say, and this is for everyone and something that took me a while to realise, is that the only thing that makes you different is you, so be you, to the best of your abilities, trust your gut above all else and make sure it’s the kind of film that you would be excited to watch. It took me years to realise that and to believe in myself enough to commit to my own ideas and my writing and now, when I have an idea or get sent a script, I ask myself “is it a you film?”.

Finding a producer or director can be hard, I’m sure. It’s about wanting to make the same films and more than anything, getting on and trusting each other. You both have to be able to be completely honest, even if it hurts. If you don’t trust one another, you will never survive a film set. Oh and, re producers specifically if you’re directing, make sure they know more than you, or at least, they’re at your level and love the project as much as you.

Sure, trust your gut no matter what. Be nice and honest always and don’t work with people who are nice to those above them while nasty to those below. Know that ultimately, you’re on your own if it all goes to shit, so make sure to keep a little part of your soul protected from the demons.

Watch loads of films and read scripts. – insane how many people that want to be screenwriters, who don’t read scripts.

Lastly, I would just say, it’s bloody hard this industry and you are constantly getting kicked in the face, so keep true to what you love and follow that, as otherwise, what’s the point?