It’s a pleasure to announce the inaugural winner of 2016’s Shore Scripts Short Film Fund competition.
Claire is currently in production on LIFT which is shooting in New York. 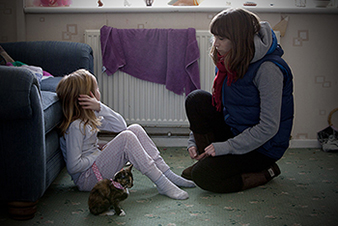 A female Lyft driver navigates the night shift in NYC while waiting to hear life or death news from Syria.

“I’m so blown away and honoured. This is such an amazing opportunity to make a film I care about. Thank you so much!” Claire Fowler David Beazley spoke with Claire Fowler, our inaugural Short Film Fund winner, about her winning screenplay, Lift. Claire will receive a £5000 ($6450) production grant, along with the full production support of Shore Scripts.

ARRI Rental are also offering free camera equipment for the film, which will be shot in New York later on in the year.

Lift is about a New York Lyft driver called Salam who happens to be female, and happens to be muslim. It follows her through one night of driving – we meet her family, see her work, and meet her passengers, particularly one whose decision to get into Salam’s car has an impact on both of them. I wanted to write a New York-centric film as I live in Brooklyn– but I wanted it reflect the city’s diversity and modernity in a way we hadn’t seen in a short film before. I have previously made a couple of documentaries set in Palestine, and I was surprised at the audience reactions whenever I attended a screening of my films. There were always individuals who expressed shock that the people on screen were so ‘normal’– so contrary to the stereotypes they had constructed from media representations. There is still plenty of anti-Arab sentiment in both America and the UK, particularly now with Brexit and Trump. It’s as good a time as any to add a positive representation into the mix. I wanted to make another short film and the fund seemed like a great way to start.

I was very happy to find out I’d won, but also a little intimidated! It’s so hard to make a short film and I still need to raise a bit more money. There’s a lot of work ahead.

I like both writing and directing. I think I’m actually a more instinctive director; I just don’t get as much of an opportunity to direct, as there are so many hurdles to jump through before you can walk on set.

I am definitely going to direct Lift. The biggest challenge is logistics. It’s always about having enough time and resources to execute your idea.

I always think about how stuff can be filmed when I write. I think it’s a bad habit actually.

I’d like to shoot on the Alexa because we have multiple night scenes and we need a camera with a wide dynamic range. I will be working with the same DP (Nick Bupp) who shot my last short, the same editor (Alec Styborski), and I will be shooting all around New York city. October would be great. I want to get the script in as good a shape as possible, to free my schedule, and then it just comes down to logistics.

I have storyboarded in the past. I don’t feel the need to any more– except for maybe complicated sequences. I always create a shot list however, despite the fact this constantly changes when on set. If you have a plan you can diverge from it. If you don’t have a plan you can get lost.

Ideally I’d be working with actors who are great and instinctive and don’t need days of rehearsal. I think if you need too much, you’ve cast the wrong people.

You can never predict which (if any) film festivals will take to a film. My hope is always to go somewhere new, and to go to bigger festivals each time I make something. But my overriding desire is always to make a film I feel passionate about and to be proud of it. I’m currently working on a feature based on my last short, NOODLES. One of the reasons I wanted to make another short was to keep momentum going on my writing and directing career. I was lucky enough to receive interest from the industry over here in the US because of NOODLES, but now I need to maintain it whilst I crank out the feature. It’s a constant hustle.

No-one is ever going to give you permission to do something, you just have to do it and find your own way around the obstacles.

There are so many lessons I’ve learnt. Like work with people who are nice and collaborative as well as talented, and stick with them when you find them. Always be nice and say please and thank you to your crew because no one is getting as much out of the experience as you are. Be calm, because stressing out and being an asshole isn’t going to help anyone.