In 1980s New York Joy Mangano is a young, creative and able woman; she’s also put-upon by her dysfunctional family, let down by her ex-husband, and broke. What follows is the rags-to-riches story that you’re expecting, but a film that you’re not.

Joy’s life hits rock bottom when her recently divorced father, Rudy, moves in to share the basement with her ex-husband Tony, who’s still there. She’s bringing up two children, and caring for her mother, physically able but an emotional child herself. Joy’s grandmother is the only support in her life, the one who’s believed in Joy as someone out of the ordinary since she was born. When Rudy gets a new girlfriend, Trudi, she turns out to be an heiress. At the same time Joy has the idea for a self-wringing mop, a mop you can dry without ever having to touch it. Joy has been inventing new ideas for ordinary life since she was a child, but her parents’ divorce caused her to put her dreams aside; until now. To get her invention made and sold Joy has to face a mountain of doubts from her family, not least her critical step-sister Peggy, and she must convince Trudi the main investor. She tackles dodgy manufacturers, and impenetrable supply chains. Then Tony manages to get her a meeting at the offices of what is the latest revolution in TV, a shopping channel, better known to us as QVC. The rest should have been history but Joy’s misery isn’t over yet as her mop doesn’t take off at all to start with. She has to persuade television executive, Neil Walker to let her go on the show herself to sell it. She finally begins to sell her mop and make some money, but her problems aren’t over, there’s still her family to contend with after all…

Joyful by name but not by nature, this is an unusual, slightly off-kilter film that’s actually quite depressing in places. David O. Russell, director of Silver Linings Playbook has teamed up once more with Jennifer Lawrence (Joy), Robert De Niro (Rudy), and Bradley Cooper (Neil Walker), and perhaps this is why we think we know what we’re going to get: big bold Hollywood means small time gal comes good and gets the money and the man.

However, this is a mainstream film delivered in a decidedly indie style, resulting in something altogether slower, quieter and sadder than you’d expect. Perhaps this is because Russell re-wrote someone else’s script, or it could be because the film had more than the usual amount of editors on board, or maybe it’s just what Russell intended in trying to stay true to the real-life elements of the story. Joy Mangano is after all a real person and the film has been described as “Semi- biographical”. It’s true that the real Joy did have a difficult family, an ex-husband who remained her friend, went on TV to sell her own product, and has since become a regular presenter on the Home Shopping Network. Although this happened in the early 90s whereas this film’s mise-en-scene seems to set it squarely in the early 80s – ?

The film’s style mixes realism with elements of magical realism – the somewhat oblique voice-over by Joy’s Grandmother; the constant presence of all Joy’s family members in the room at every crucial moment. This leads, as it’s meant to, to an ultimately deeper reality than you might find in a more straight forward biopic such as The Social Network. While some of the family moments are comedic, there is truth in the sadness of their twisted behaviour and the hopelessness of being trapped in such a situation. However, this deliberate over-stylisation keeps us at an inevitable distance from the main characters, lessening the impact of what could have been a powerful character piece. It also makes it harder to get involved in the story as a whole and you spend more time wondering ‘What kind of movie is this?’ rather than just enjoying the ride. The muted nature of some of the drama, and almost refusal by the film makers to allow much exuberance into the film – we’re reminded by Joy’s grandmother in the closing scenes that at this point Joy most definitely did not know that she would go on to be so successful – means that over all the film lacks dramatic impact. 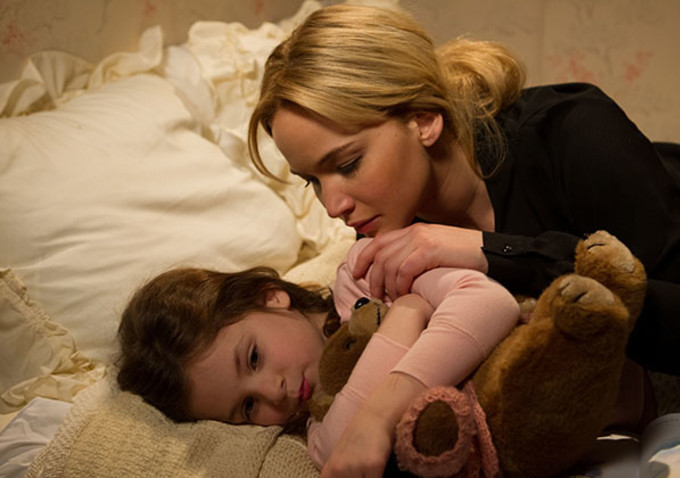 To give Lawrence her credit, she’s just received an academy award nomination for playing Joy, and she was indeed very good. Watch out for the break-down scene near the end for a truly impressive performance. However, I can’t help feeling that she was lucky to get the nomination for this particular character. In contrast to the film itself, Joy is everything you expect, ballsy, industrious, she gets knocked down but she gets up again; and of course she’s a super nice person showing how little the rest of her family deserve her attention. And that’s about it. To begin with she’s canny and hard working. Her character then moves on dramatically when she has a dream realising thatshe’s been shutting away the creative part of herself, after which she wakes up and tells Rudy and Tony they have to move out of the basement. From then on she continues to be canny and hard working but channels this into the production of her mop. She gets a chance to show off just how sharp she is before the end of the film but hasn’t she always been this way? And she’s still getting screwed over by her family, nothing has changed here. There simply isn’t enough journey for this character and ultimately she’s likeable, but not memorable enough.

There are other elements of the film that seem slightly unbalanced. De Niro nearly steals the show in the first part, the story being almost as much about him. Joy’s troubled relationship with her step- sister is never explored. They seem to start out on good terms but by the end Peggy nearly ruins her life due to some unexplained jealousy.

On the plus side there are good performances all round, not just from Jennifer Lawrence. Virginia Madsen as Joy’s emotionally stunted, incredibly needy, mother is so good she’s hard to watch at times. Isabella Rossellini is a surprise turning up as Trudi. Bradley Cooper is also a pleasant surprise. He feels a little ‘placed’ when he finally appears as Neil Walker but the role actually suits him well, and he carries off a believable mixture of selfish executive and genuine friend. As for what happens to him and Lawrence, well you’ll just have to go and see it to find out…

If you prefer indie cinema to the mainstream, but can’t resist going to see these big stars; or if you’re just in the mood for something a little bit different then go and see this film, but make sure you set your expectations right. Russell said he and Jennifer Lawrence only wanted to do the film because it’s not something they’ve done together before, but perhaps their own huge reputations are actually limiting what is truly available to them now in terms of the audience expectations they create.