How to write a phone conversation in a screenplay.

How To Write A Phone Conversation In A Screenplay #1: One Character Only

This is formatted pretty much just like normal dialogue and is best used for short phone conversations.

Note how you don’t have to put a parenthetical under the character name saying “on phone” or “into phone”. As long as you’ve indicated the character’s picked up the phone it’s not needed.

Another thing to avoid is filling one-sided conversations like this with a “beat” or “pause” parenthetical every time the character listens to the person on the other end, like this:

Likewise, this is not necessary as it just takes up valuable real estate in your screenplay. And besides, actors generally hate being told when to pause during a phone dialogue conversation like this.

Parentheticals can come in handy, though, during one-sided phone conversations when a character is dealing with other things in the scene while talking on the phone. Here’s an example: 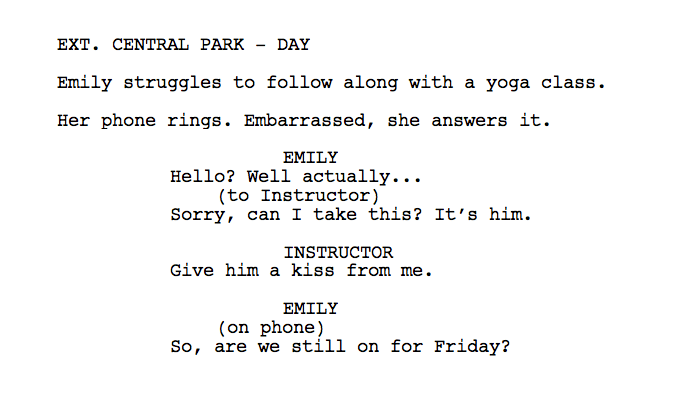 How To Write A Phone Conversation In A Screenplay#2: Voice Over (V.O)

This article was originally published by Script Reader Pro, a leading screenplay consultancy company based in the heart of Hollywood, California, who’ve been helping writers improve their craft since 2010. For more information on their services visit http://www.scriptreaderpro.com/