An article by Bill Mesce.

We hear radio but we don’t really listen to it. Whether we’re subscribing to Sirius, using our IHeartRadio app, or cruising through the channels on our car set or home stereo, it’s for background, something to fill up the silence while we hang with friends, do house chores, muddle our way through homework, keep us company while commuting to work. We hear; we don’t listen. For the most part, radio provides us with pleasant background noise for some other activity, rarely anything more.

It would probably be hard for most of us – particularly those growing up in an era swamped by video-driven media platforms – to imagine a family blocking time out of its day to sit together for an hour or so listening to the radio. I mean really listening!  For those looking to explore the auditory possibilities of scripted podcasts or other strictly audio platforms, it might be worth looking back to see how the first masters of writing for the ear pulled it off because we seem to be at a point where as far as that goes, what was old is now new again. 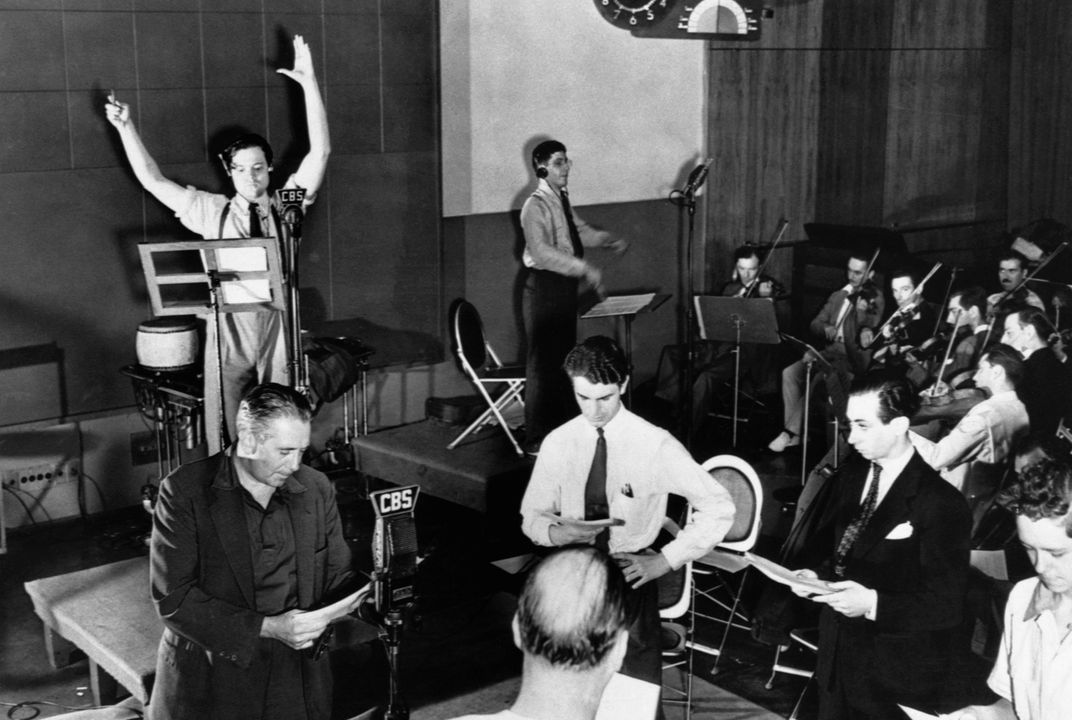 The first radio networks – NBC and CBS – went on the air in the late 1920s.  By the 1930s, radio had established itself as the home entertainment of the day, bearing very little resemblance to how we think of music/talk-driven radio today.

Radio of that era was not only as popular as TV is today but was programmed a lot like it. There was, of course, recorded and live music, but there were also variety shows, game shows, news and documentaries, talk shows, children’s programs, soap operas, cop shows and mysteries, Westerns, dramas, horror shows, anthology series, sitcoms. There was even a version of made-for-radio movies as popular theatrical features were adapted for radio often featuring stars of the film repeating their roles for the radio audience. You’d be hard put to come up with a TV programming format that can’t trace its ancestry to the Golden Age of Radio running from the 1930s into the 1940s. The three major TV networks that still exist today – ABC, CBS, NBC – were launched by radio networks who built the TV network system on top of their radio network infrastructure. As TV broadcasters, they not only produced the same types of shows for TV that they’d produced for radio, they often took those very same shows from radio and planted them on TV. All told, approximately 200 shows made the migration from radio to TV. 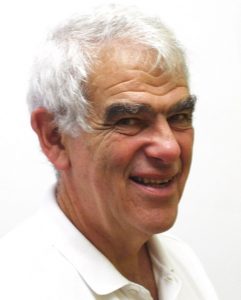 The magic of radio, the miracle of radio, mostly because it was so amazing that such a thing could exist: this was at a time when everyone stopped to look up every time an airplane flew over. If you were lucky, there was one telephone in the house – or else you had to run down to the candy store when they sent someone up to tell you you had a call on their pay phone.  Hard to believe it has all come so far…

The radio was like an electronic fireplace where the family gathered together to share the comfort of the after-dinner shows: Fibber Magee and Molly with its hall closet that used every sound effect known to man when it was opened, a moment you knew was coming but still delighted in anew; dramas like Lux  Radio Theater, Mr. First Nighter, Grand Central Station, all featuring big Hollywood stars, right in your living room.  It was a time when we expected less and appreciated more.

Then there were the afternoon serials, fifteen minutes of adventure with Terry and the Pirates, Captain Midnight, Buck Rogers, The Green Hornet, and all the magical stuff you could send away for: decoder rings, belt buckles with secret compartments, silver bullets from the Lone Ranger, all for ten cents and a Silver Cup bread wrapper.

But mostly there was the part imagination got to play: it wasn’t all there in front of you, so you created your own pictures and that made it all more personal. We played those characters in our games, and since no one knew what they looked like, any one of them could be me.

If you want to get a fun picture of what that universe was like, I recommend Woody Allen’s Radio Days (1987) for some idea of the pop-culture impact radio had at its peak.

The writers of those programs understood and mastered two things:

We are visual creatures. Our eyes provide our primary sensory input. It’s undoubtedly why television so quickly eclipsed radio once the commercial TV era launched in the late 1940s. In 1948, there were only about 500,000 TV sets in homes across the country. Just six years later, 26 million homes were tuning in to the three major broadcast networks.  By the end of the 1950s, just about everybody who wanted a TV had one, and radio had devolved into primarily a music platform (and later, because it was cheaper than music, came all-talk and all-news stations).

But now we take away that visual component and what do you do? Think about it: you’re writing for film or TV, the first scene of your story opens in an office. No biggie; we can see it. But how do you do that on radio? None of the information we’re routinely given visually is available to us unless you find a way to convey it aurally, and in whole or in part that’s going to come down to dialogue.

Storytelling during radio’s Golden Age relied – had to rely – almost exclusively on dialogue. In this, I’d say radio scripts’ closest kin is writing for the stage. Both the playwright and the radio scriptwriter have/had for the most part only dialogue to define characters, illustrate character relationships, and convey plot information.

And because dialogue provides the foundation for, well, everything in the radio format (as with a play), it can’t be perfunctory, it can’t be just functional. Dialogue has to be rich, full, distinctive, no pregnant pauses which may be dramatic as hell on the screen but offer the listener only dead air. Hangover-style dialogue of exasperated goofballs constantly saying, “What the f**k?” may work on-screen buoyed by slapsticky visuals, but it isn’t going to work when all the listening audience has is, “What the f**k?” Audio performers have to be given material they can run with, they can perform with relish (low-key tends not to work as well in audio-only venues; voice actors tend to take things up a notch to compensate for the fact that we can’t see their performances). 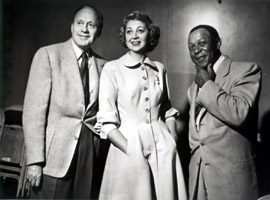 Richard Balzer had been one of the regular writers on The Jack Benny Program, considered one of the all-time classic radio comedies from that era. In describing writing for Benny’s unique delivery, Balzer gives some idea of the demands the audio writer needs to meet, saying that writing for the comedian was like composing music, with one element being the rhythm of delivery as equivalent to musical tempo.

Compounding the pressure on the spoken word is that scenes on radio tended to be longer than most scenes in contemporary film and TV which rarely run more than a few minutes and come to their points rather quickly. Like its stage counterpart, scenes in radio come closer to approximating real-life exchanges with slower builds and extended lengths. Someone who’s been writing for TV and film and has rarely written a scene running more than two pages might find it a challenge to tackle a full-length story made up of scenes running — depending on the story — five-ten minutes or more.

Radio writers also knew how to use the medium’s biggest limitation – no visuals – to its advantage. Bill Persky alludes to it when he talks about Fibber Magee’s running gag of its junk-filled closet. Radio writers often took advantage of the fact that their audience would have to fill in the blanks. Similar to Magee’s avalanching closet was Jack Benny’s vault on The Jack Benny Program.

Ace comedian Benny had, over the years, carefully built up a comic persona as an outrageous cheapskate. On the show, he kept his money stored in a subterranean vault, tended by a guard who’d been on duty since before the Civil War, and whose door opening set off a cacophony of alarms. When Benny’s show transferred to TV and the vault had to be portrayed, it was never as funny as what listeners had composed in their heads.

Similarly, there’s the case of poor ol’ William Conrad.  The actor had a great voice for radio; deep, rich, authoritative.  When voicing Marshal Matt Dillon for the radio version of Gunsmoke, it was a voice that reeked of a manly man doing manly things. But when the show transferred to TV, short, round, beady-eyed, balding Conrad wasn’t going to cut it and he was replaced by tall, broad-shouldered James Arness.

There is arguably no better example of the effect of a listener’s imagination + a shrewd radio writer’s ability to exploit that imagination could produce than Orson Welles’ infamous radio adaptation of H.G. Wells’ The War of the Worlds. Presented on Halloween night in 1938 as part of CBS’ anthology series The Mercury Theatre of the Air, Welles presented the story as a breaking newscast from the sight of a mysterious extraterrestrial landing in rural New Jersey. Listeners who came into the show late and missed the set-up thought they were coming into a real radio broadcast. Although stories of widespread panic created by the show turned out to be highly exaggerated and apocryphal, what isn’t debated is that the credibility of the broadcast did set the network’s switchboard alight. 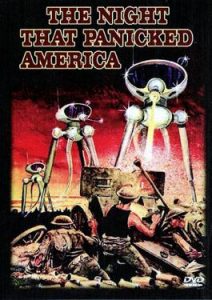 (If you can find the 1975 made-for-TV movie, The Night That Panicked America, its recreation of the broadcast gives some idea of the tricks of the trade Welles & Co. used to convey their Martian invasion. My favorite: hanging a microphone over a toilet in the men’s room while slowly unscrewing the top off a large jar held inside the bowl to create the sound of one of the Martian machines opening up!)

While TV-like radio began to fade over the course of the 1950s, audio-only entertainment found a second incarnation in comedy albums. We’re not talking recordings of comedy concerts and nightclub performances, but comedy presentations designed specifically for listening. Some of the most memorable came from the comedy troupe Firesign Theater (think of them as the audio version of Monty Python’s Flying Circus) and the comedy duo Cheech and Chong, both outfits putting out a number of sketch-filled albums.

Like their Golden Age of Radio predecessors, they combined comedy dialogue that sparked with an often hysterical use of sound effects. Personal favorite: Cheech and Chong’s – Sister Mary Elephant sketch which pits its parochial school teacher title character against a heavily layered soundtrack giving the impression of dozens of out-of-control students (all played by the duo).

The booming podcast universe offers the possibility of another contemporary incarnation of scripted audio entertainment, and the writing style required needs to be worked at to transfer from visual-oriented forms. The aspiring writer of podcasts might do well to do take a good look – sorry, a good listen – to those maestros of the past for some clues as to how to command the present. 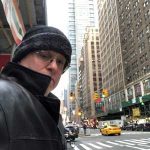 Bill Mesce, Jr. is a screenwriter and an award-winning author and playwright. His screen credits include ROAD ENDS and uncredited work on Brian DePalma’s BLOW OUT. Besides his fiction, he has written a number of books on film and the media including Reel Change: The Changing Nature of Hollywood; Inside The Rise Of HBO: A Personal History Of The Company That Transformed Television, and The Rules Of Screenwriting & Why You Should Break Them. He is currently an adjunct instructor at several colleges and universities in New Jersey.