How to avoid the common mistake “don’t direct the script!”

It’s perhaps one of the most common script notes readers give, and something that can have the unfortunate effect of making the writer seem a little over-precious: don’t direct the script!

This usually involves details of the location requirements and camera instructions such as SLOW MOTION, PAN, DISSOLVE, CUT and FREEZE FRAME. 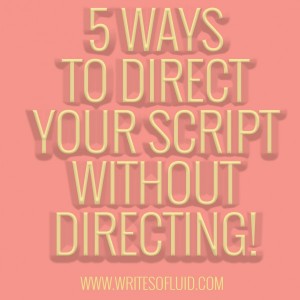 It can also sometimes involve controlling the actors through parenthesis instructions before and during dialogues, such as (pregnant pause) and (sighs, then shouts.)

Descriptions, too, that focus on every movement an actor makes, such as “X walks over to the door, looks left at the photograph, rubs his head in anguish then yanks the door open, goes through it and slams the door behind him.”

So what can you do to avoid these sorts of style faux pas? You need to INFER the directing, show rather than tell internal descriptions, as well as trusting your actors to do the actions and dialogues justice.

Instead of “Close-up on X’s weathered hand, expertly spinning a pen” you could try “A pen expertly spins in weathered hands.” Essentially, we are telling the reader what they are looking at, without actually saying it must be a close-up – we’ve inferred it by being specific about the object.

ALLOW US TO FOCUS ON SOMETHING

Instead of “pan across a vast forest”, why not give us something to focus on that isn’t just a camera direction? For example, “an eagle soars above the never-ending forest treetops” is much more visual and interesting.

Instead of “X looks angry”, have X do something to show it, like kicking a bin.

Instead of stating there’s a pause, infer the wasted time. If X is waiting for an answer from another character, he could impatiently encourage the answer through dialogue. If X is pausing himself, then you could show him getting distracted by something in the location or changing the subject (avoidance).

Descriptions can often come across as wooden and repetitive, so the above methods need to be used to create a more concise and entertaining read. For example the following description feels like a list of “he does this, he does that” and tells us how X feels instead of showing us. We have camera directions and there’s the dreaded “suddenly” word. We can do better than this!

“Pan as X runs frantically. He is wearing a raincoat and has a large bag swung over his shoulder. It’s heavy and slowing him down. Close-up on his face, he’s sweating. He keeps looking behind to see if he is still being chased. He is scared. He trips over and only just manages to pick himself up. He leaves the bag behind and carries on running. Suddenly, he runs into a man in a black suit.”

“X runs full pelt, wind whipping through his raincoat. Sweat trickles down his face, drips flying off as he frantically spins to check for pursuers. Struggles with the large bag — loses balance, goes down. Closes eyes: it’d be so easy to give up… No, can’t. Sod the bag. Up, keep running. And he does, until — THWACK, X gets a face full of black suit.”

TO SUMMARISE: cut as many forms of directions as you can, trust the actors, and if you must direct the script then infer them and be sure to write your action descriptions in interesting and entertaining ways.