Esther In Wonderland: An Interview with Stephanie Bollag 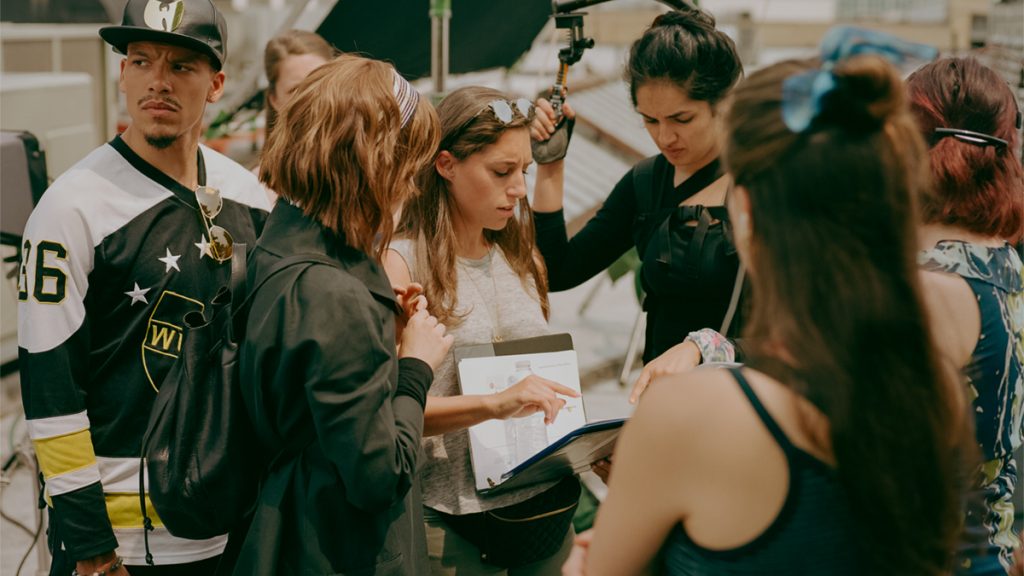 Director Stephanie Bollag on set with cast and crew.

STEPHANIE BOLLAG won First Prize in our 2018 Short Screenplay Competition with Esther In Wonderland. We took the opportunity to sit down with Stephanie to discuss the inspiration behind her story and her recent experiences taking her short film into production.

Logline: A Hasidic married young woman sneaks off to join a crew of female break-dancers and risks being uncovered.

SS: Can you describe how the idea of a story featuring the Jewish Community and break-dancing came about? What was your inspiration for Esther In Wonderland? 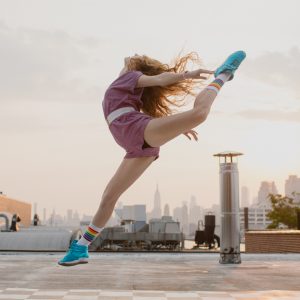 SB: All my films to date center around women, who feel the urge to challenge the status quo and find their own voice. Both as a woman and as a Jew, I am continuously redefining my identity, asking myself: Who am I really? And how much is who I am a construct of society, religion, parental hopes, etc.?

The idea for ‘Esther In Wonderland’ grew organically and over time and is the fruit of my collaboration with co-writer Lily Lyor Ashkenazi, who I am currently developing the feature version of Esther’s story with. We have been working together on multiple versions of the script for over two years now. My previous short films, in particular, ‘Aruma’ (Hebrew for Naked Woman), deal with similar themes. In addition, most of my work involves some form of dance. To me, dance (paired with music) is the purest way to convey emotion without having to use dialogue. But it was only when my dad passed away two and a half years ago that the idea really materialized. There was this burning need to tell the story of a young woman, who feels challenged to reach a deeper truth about herself, as opposed to who she is expected to be.

And it all came together when I flew back to New York two weeks after my father’s funeral to film a fashion commercial. One of the models I cast was a breakdancer, Yansen. We became fast friends, and he took me to several breakdance battles and competitions. I fell in love with the energy and openness of that community, which stands in contrast to- but also shares similarities with- the Jewish community. At one of the dance battles I asked Yansen to introduce me to Martha – her cool, mysterious demeanor intrigued me. In time, I discovered many more layers to her. She became the inspiration for the character of Dream, who will remain central in the feature film Lily and I are working on. 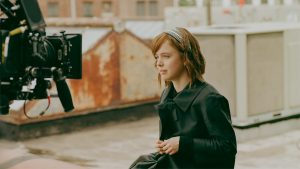 SS: Can you talk about what challenges you faced while shooting Esther In Wonderland, and how you overcame these obstacles?

SB: Making films, short and long, is always a bit of a shit show (excuse my French). Due to several issues in pre-production, the film almost didn’t happen. But giving up was never an option. The positive energy and dedication of my dancers and the support of my entire crew made me feel like I could overcome anything. My background in producing further helped me find quick solutions and do damage control.

The actual shoot of ‘Esther In Wonderland’ turned out to be quite magical. We managed to shoot a lot over only two days. Most of the crew members have been my collaborators for years, which created a sense of trust and familiarity on set and made directing a pleasure.

SS: What 3 key tips do you advise other filmmakers to consider when it comes to filming their own projects?

SB:  Your script is never done.

Never not make changes to your script, just because production tells you it won’t be possible or too complicated. And if the changes you want to make aren’t reconcilable with your budget, then really think about what you are trying to say with the added/changed scene or moment. Less is often more.

Your actor is your character.

Every director has their own methods, but I always merge elements of the actor’s private life and personality with the character on the page. Getting to know your actors, their life experiences, even their mannerism, will most likely help you arrive at a more truthful depiction of your protagonists.

Making films, whether you’re in development or on set, demands a big time-commitment. You spend hours, days, weeks, even months on end with your collaborators. Yes, talent is important, but there are plenty of talented AND nice professionals out there, so why tolerate arrogance or unprofessionalism? It might take you a bit longer to find “your” people, but it’s worth it. And once you do, hold on to them!

SS: You’re a director as well as a writer, can you share how this enriches your experience of filmmaking and storytelling, and would you advise other directors/writers to also explore other roles of filmmaking to support their writing? 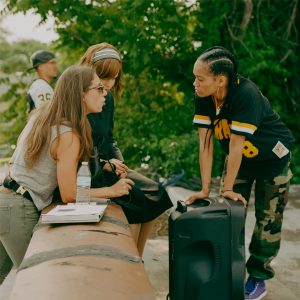 Writer/director Stephanie Bollag taking a moment to reconvene with her two leads Naian Gonzales Norvind (as Esther) and Martha Bernabel (as Dream).

SB: When I’m feeling deflated or rejected, I sometimes ask myself if it wouldn’t be easier to direct someone else’s story/writing. And if not easier, then certainly faster. But writing is like therapy. The more you know about yourself, the greater the potential for a meaningful story. And having Lily to co-create with has been an unimaginable gift.

Back at NYU Tisch Grad Film, all writing/directing candidates were required to do sound, shoot, light, edit and produce at least once on someone else’s film. This gave me a lot of insight into the technical aspects of filmmaking and has helped me develop a language to communicate my audio-visual ideas in a clear fashion. If I had to choose, I would say that learning how to edit has helped me the most in terms of writing.

SS: All filmmakers/writers endure rejection at some point; what do you do to stay positive and focused on your projects?

SB: It’s not that I am completely numb to rejections, but by now they hit me less hard than they used to. It still depends, of course, not all rejections are equal. I try to look at my filmmaking journey long-term, and how can there be long-term if I let myself be defeated? I don’t always manage to stay positive, but I don’t give up and I move on. Like my mom says, what good is it bemoaning what cannot be changed. 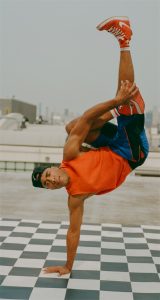 SS: Can you tell us what’s next for Esther in Wonderland, and can you share any details of new projects you’re working on?

SB: ‘Esther In Wonderland’ is currently in post-production. Due to a lack of funds, we had to take a bit of a break from editing but should still be ready to submit the film to festivals in early 2020. The plan is to record original music for the film, which I’m incredibly excited about. Look out for posts about casting NYC and LA-based musicians and singers for the film’s soundtrack on my Instagram Stories: https://www.instagram.com/stephaniebollag/

I am currently also co-writing the feature version of ‘Esther In Wonderland’. It will be my first feature. And there are a few fashion commercials in the works. 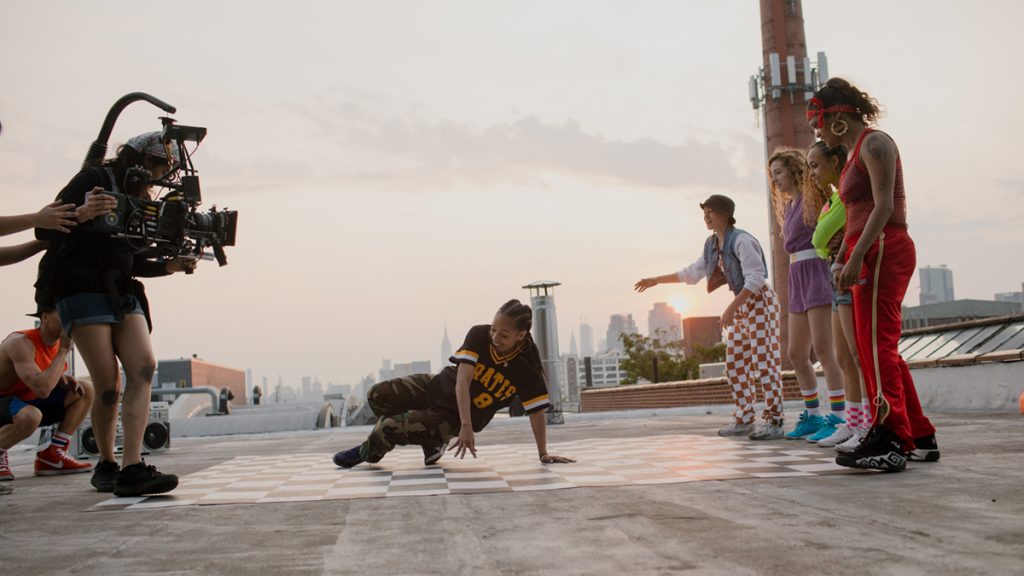 Director of photography Zamarin Wahdat doing her magic while the dancers perform. 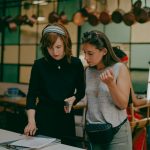 Stephanie Bollag is an award-winning Swiss/Swedish director and writer based in New York City. Her latest short script ‘Esther In Wonderland’ won Best Script at the 2019 Atlanta Film Festival and the 2018 Shore Scripts Screenplay Competition. Her short films have screened and won a number of Jury and Best Short awards at festivals worldwide. She previously worked in film production in Switzerland, the UK and Israel, including on films, such as Israeli war drama ‘Beaufort’ (Academy Award nominee, 2008), British science-fiction thriller ‘Identicals’ (Edinburgh Film Festival nominee, 2015) and the short ‘Hold On Me’ (Best Short at London Independent Film Festival, 2011). Stephanie holds an MFA in film writing and directing from NYU Tisch School of the Arts Graduate Film. She speaks six languages. More information: www.stephaniebollag.com