Bubble: A Sci-Fi Comedy Podcast. It happened! But how did it happen? 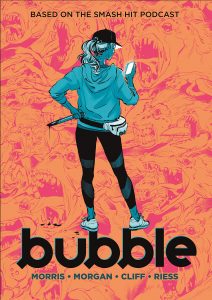 In 2017 I was writing for a late-night comedy show that was coming to an end. In advance of doing the requisite pavement-pounding a writer does when looking for their next gig I decided I should write a new sample to send around to potential employers. At that point most of my professional experience was in late-night and sketch comedy. I needed something more traditionally narrative if I was going to apply for those types of gigs. I’ve always loved genre stuff so I started with the vague notion that I wanted to write something that was a comedy take on fantasy/sci-fi.

Around this time, I went to visit a friend who lived in the hippest part of Brooklyn. I still don’t know my way around Brooklyn’s micro-neighborhoods so let’s just call it East Complicated Facial Hairsburg. This friend loved the neighborhood but put up with a series of indignities, including sleeping in a walk-in closet, in order to live in a charming neighborhood with great bars and easy access to improv classes. This is not a phenomenon unique to Brooklyn. From Silverlake to Portland to Burlington (Google tells me this is Vermont’s hippest city) my peers and I are putting up with sky-high rents, impossible parking and claustrophobic living spaces in order to be close to the coolest cool stuff. I thought about the sci-fi extreme of this concept and imagined a scene where a hipster has to fight monsters on her morning run but it’s not a huge deal because after she’s done she goes to a great little breakfast burrito pop-up.

Now that I had a germ of an idea, I took my first few weeks of unemployment to write the pilot script. Once it was done I thought about ways I could present it that weren’t “Hello BUSINESS CONTACT. Attached is a .PDF of a sci-fi comedy script with a complicated premise written by me, a man with no professional experience in this genre.” I’ve been doing a chat podcast called Jordan, Jesse, Go since 2007. It has no premise. It is from an era in podcasting where “affable comedy chatting” was enough. From doing this show I’m lucky enough to have a great roster of funny people I can send emails to. I also know people who own microphones. I decided to do a staged reading and make a recording to send around with the script. Maybe showbiz people would be more likely to listen to it rather than read it?

Jesse Thorn, the owner of Maximumfun.org and my podcast co-host, suggested dropping the recording into our podcast feed since most of the actors were beloved recurring guests. Our fans really liked it and immediately started asking if there were going to be more episodes. Jesse and Maximum Fun had been talking about trying a scripted show (their lineup is mostly humorous talk and pop-culture). We agreed that I’d head up writing a “season” for free and Max Fun would find a budget to pay actors, directors, editors, and some additional writers. I outlined 8 episodes with the help of the great comedy writer Nick Adams (Bojack Horseman, Blackish). I wrote scripts for 4 of the episodes and 4 other writers wrote one episode a piece. We then had two days of punch-up with a room of great comedy brains. Everyone got paid a little bit but nowhere near what they were worth. Hopefully it was fun.

The podcast came out in the summer of 2018 and had an enthusiastic audience from the get-go. Max Fun has a really awesome fan base and the cast of familiar voices from the podcast-averse got people to take a chance on a format (episodic scripted fiction) that is still pretty rare in the medium. A few weeks into the season a few different TV/Film people started to get in contact to ask about adapting it. The most enthusiastic of these was an executive named Camilla Grove from Matt Tolmach Productions. She had a legit enthusiasm for the characters and the world that was apparent from the get-go. Some of the other people I met with were like “It’s a podcast! Cool! We have heard podcasts are cool now!” and didn’t seem to care about any other aspect of it. After making things official with Matt Tolmach Productions, they brought on Point Grey Productions and the writing team of Kyle Hunter and Ariel Shaffir (who wrote the R-rated animated movie Sausage Party among many other hilarious things). We all pitched it to Sony Animation as an R-rated animated feature and they were into it. I am currently writing the script with Kyle and Ariel.

Around the time Camilla got in touch an editor for First Second Books (maker of fine graphic novels) named Calista Brill got in touch. She’s a big podcast fan and did a great job of bringing Max Fun’s RPG podcast The Adventure Zone to comics. I could not say yes fast enough. I’m a lifelong comics reader and huge fan of First Second’s books in particular. I co-wrote a script with the hilarious Sarah Morgan (who worked on the podcast) and First Second hooked us up with the award-winning comics artist Tony Cliff (best known for the Delilah Dirk series) to draw. I should mention that Tony is also a great writer and contributed many hilarious jokes and much story help. After Tony finished the “inks,” Natalie Reiss (who co-created the fantastic kids’ comics series Dungeon Critters) added the colors. The book will be released on 7/13/21 and is available for pre-order now. Please pre-order it. It’s really cool and I love it so much.

It’s really exciting that narrative podcasts are now something people can make. Putting aside art for commerce for a second, modern showbiz has the expectation that writers will take their original scripts and do something with them. Is this an unreasonable expectation? Yes, absolutely. I already wrote the damn thing, now I have to produce it too? I don’t have a job, that’s why I wrote something in the first place! To get a job! Now I’m supposed to bankroll some sort of production? But podcasting is a relatively easy way to produce something without maxing out your credit cards to shoot an indie film or a pilot (I should acknowledge microphones, editing software and web hosting ain’t cheap either, especially if you’re just starting out).

If you’ve got an idea that you love, especially something that’s weird or ambitious or plays with genre in an unusual way, consider telling the story via podcast. The podcast-o-sphere is full of awesome fans who are open to ideas and stories that are a notch stranger than you see in pop-culture at large. Do it! It’ll be fun.

We set up our Podcast Contest for the very reason of supporting talented writers so that they don’t have to finance their own work. We will be producing the top two winning podcasts, each with budgets of $5,000. Find out more. 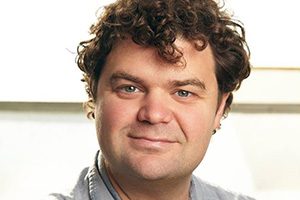