The Holiday Movies with the Most Iconic Music—And How They Can Inspire You When Writing Your Own Screenplay by Tara Yarlagadda.

Season’s Greetings, Screenwriters! When I think of my favorite Christmas movies, what comes immediately to mind are the holiday jingles, wintery tunes and heart-warming carols that accompany the defining moments in these films. As a screenwriter, you should only list specific songs in your script when absolutely necessary, since chances are that the songs will be changed in the final production script (not to mention the killer music licensing fees). Or, if the music is essential to your screenplay, keep the song descriptions generic, such as, “country music hums from the jukebox…” But that doesn’t mean you can’t derive inspiration from music to fuel your writing process and set the tone of your screenplay.

If you’re feeling stuck on a particular act break or think the tone is off in one of your pivotal scenes, ask yourself: “What song or type of music would I imagine playing in the background?” This doesn’t just apply to holiday flicks, but to any genre: you could be writing a family drama thrumming with hip-hop undertones, an action-packed thriller to the tune of your favorite Beyoncé track, a romantic comedy bursting with indie rock or a horror movie blasting Celtic beats. This is one of my favorite tricks to overcoming writer’s block, getting the creative juices flowing and setting the mood for my scenes. To aid the writing process and get you in the holiday spirit, Shore Scripts has described five iconic Christmas movie songs that complete these cinematic treats. May your holiday season be filled with productive writing sessions! 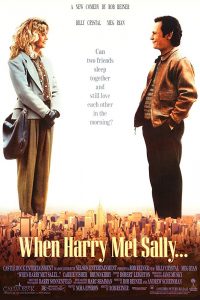 In this witty classic that defined the rom-com genre, Harry and Sally debate the meaning of the line “should old acquaintance be forgot” in the song “Auld Lang Syne” as they puzzle through their own complicated friendship at a New Year’s Eve party. The song makes a poignant return in the movie’s penultimate New Year’s Eve scene as Harry admits his true feelings for Sally, thus completing the film’s narrative arc from friendship to love. Fun fact: the phrase ‘Auld Lang Syne’ roughly translates to “for old time’s sake” and stems from an old folk song copied down by Scotsman Robert Burns in the 1780s. While the song has traditionally been used to mark the New Year, it’s also had more unorthodox uses, such as demarcating store closing times in Japan. As an added bonus: we’re sharing this early draft of When Harry Met Sally. 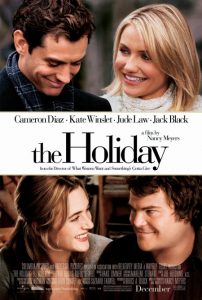 While not necessarily a critical hit, The Holiday is a popular film that stands out for its love of old Hollywood and its embrace of music to bring its lovers together. Especially given that composer Miles woos main character Iris partly through a song that he creates just for her, we’d be remiss if we didn’t mention this movie’s delightful soundtrack. No great surprise, considering the great Hans Zimmer scored the film. The gentle song “Maestro” marks some of the tender beats where the leading ladies begin to fall in love. The film also gets bonus points for a) featuring delightful old-timey screenwriter Arthur Abbott as main character Iris’ friend and b) for being one of the last few movies I can recall to feature a fun outing to Blockbuster, which now seems as much a relic as rewinding your VHS tapes. 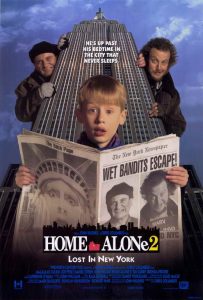 Apart from its being a regular on the holiday rerun circuit, I also love Home Alone 2 because of a wonderful sequence where the lively “Jingle Bell Rock” accompanies protagonist Kevin’s adventures through the Plaza Hotel. Before he encounters thieves and realizes that spending Christmas in New York alone isn’t all that it’s cracked up to be, carefree Kevin has a blast enraging hotel staff and splashing around in giant pools without his undergarments. The movie is also replete with original songs scored by the one-and-only John Williams. One particularly memorable one is “Christmas Star” which plays when Kevin and his mother think of each other, homesick and aching for the other’s company. The song captures the bittersweet, melancholy feelings that often drift in with the snow over the Christmas holiday. Fun fact: the Plaza Hotel in New York has been the site of countless other films, including classics like North by Northwest and Midnight Cowboy. 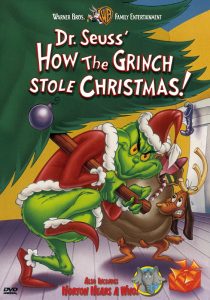 How the Grinch Stole Christmas – “You’re A Mean One, Mr. Grinch”

This childishly comical song underscores the dramatic transformation that the rotten-but-later-redeemed Mr. Grinch undergoes throughout the course of the movie. By the end of the film, it would be hard to imagine anyone calling Mr. Grinch a “nasty wasty skunk.” He goes from being told that, “Your heart’s a dead tomato splotched with moldy purple spots, Mr. Grinch” as he pilfers Christmas ornaments in the song to his heart famously growing three sizes that day—as they say in Whoville. The song also makes a delightful appearance in the original Home Alone, playing on the television screen while Kevin snoozes in an armchair. 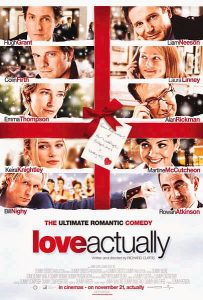 Love Actually – “All I Want for Christmas Is You”

Love Actually is chock full of songs that will warm your heart. Well, not the grating “Christmas is All Around’ which serves as a running gag about the washed-up pop star Billy Mack. Although, the song reveals its greater purpose when it reaches No. 1 on the charts, causing Billy to realize that he should spend Christmas with the one person he loves: his manager, Joe. But the main song we’re going to focus on is the classic “All I Want for Christmas is You.” As little Sam’s love interest, Joanna, belts out the song in this over-the-top middle school performance, several of the respective stories in the film reach their emotional climax. This song culminates with the Prime Minister smooching Natalie on stage and Sam realizing that his wicked drum playing alone isn’t enough to make Joanna love him. It’s a perfect example of how thematic songs can bring together disconnected storylines, particularly in movies with an ensemble cast.

Tara Yarlagadda is a multimedia storyteller, freelance journalist and erstwhile novelist and screenwriter. You can find her screenwriting musings on Twitter @TaraYarla and other related work on her website at tarayarlagadda.com.